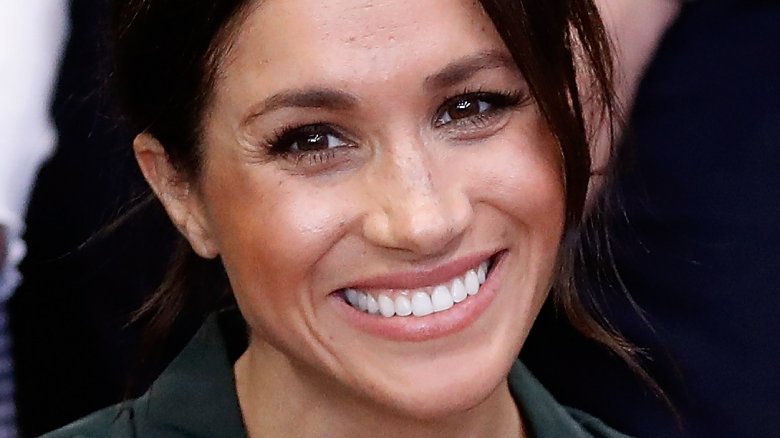 According to AOL, the royal fashionista looked as amazing as ever at the latest royal wedding while sporting a familiar designer look on Friday, Oct. 12, 2018.

While attending Princess Eugenie of York’s nuptials to Jack Brooksbank at St. George’s Chapel at Windsor Castle — where Markle and Prince Harry also famously tied the knot earlier this spring — the former Suits actress donned a stunning navy blue Givenchy coat and dress ensemble, which she paired with a matching Noel Stewart hat.

As People magazine noted, two of Prince Harry’s exes — actress Cressida Bonas and businesswoman Chelsy Davy — also looked gorgeous while coincidentally serving up navy blue looks on the princess’ big day. However, fans of the British royal family may remember that Markle also opted for a gorgeous white Givenchy gown during her own marriage ceremony.

Speaking of blue, Markle recently revealed that her “something blue” was actually hidden in plain sight in the veil of her wedding dress, which included a secret throwback to when she first got together with husband Prince Harry. In the new documentary Queen of the World, which was released earlier this month, Markle is shown seeing her famous dress for the first time since the couple married.

“My goodness. It’s amazing, isn’t it? The work that they did here is just so beautiful,” she said to the interviewer, adding, “Somewhere in here there’s a piece of — did you see it? The piece of blue fabric that’s stitched inside? It was my something blue.” Markle explained, “It’s fabric from the dress that I wore on our first date.” At this, the interviewer was basically all of us when she replied, “Oh, that’s about the most romantic thing I’ve ever heard.”

The royal newlyweds, who first met at a ski resort in Verbier, Switzerland in 2011, announced their engagement in January of this year. Just ahead of their big day, the princess told the BBC, “We met when I was 20 and Jack was 24, and fell in love. We have the same passions and drive for life.” She added, “It’s so nice that we get to share this moment with everyone, and you get to meet Jack.”

Princess Eugenie, who is ninth in line to the throne, rightfully stole the show upon her arrival at the castle with her father, Prince Andrew. Sporting a custom wedding gown by designers Peter Pilotto and Christopher De Vos, the glowing bride completed her look with emerald jewelry given to her by her groom. She also wore a Greville Emerald Kokoshnik Tiara, courtesy of the Queen herself.

While the royal family celebrates Princess Eugenie and Jack Brooksbank’s nuptials, Meghan Markle’s estranged family has unfortunately continued to make headlines for all of the wrong reasons.

During a recent interview with The National Enquirer, dad Thomas Markle reportedly admitted to having “an occasional sniff of cocaine” while working as a lighting director in Hollywood back in the ’70s and ’80s (via The Sun). However, the 74-year-old, who infamously sparked a media storm over staged paparazzi photos just days before his famous daughter’s wedding, has since denied that the interview actually took place. As he apparently told Radar Online, the reporter in question “lied to me! He cheated me! He’s a thief, a liar, and a coward.” Thomas reportedly added, “If he ever comes down here, I’ll break his f**king legs! And you can quote me on that!”

Meanwhile, the duchess’ half-sister, Samantha Markle, was reportedly turned away by Kensington Palace security earlier this week after showing up unannounced amid their ongoing family feud, which began to play out in the press after she failed to score an invite to her half-sister’s nuptials. The 53-year-old had publicly apologized to her 37-year-old half-sister last week after flying to London to try to speak with her in person. However, she’s since continued to slam the British royals on social media.