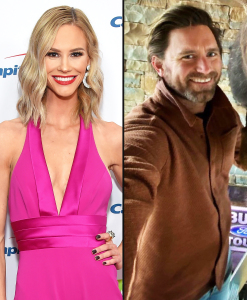 Meghan King Edmonds is embracing a new outdoorsy lifestyle as she spends time with new man Christian Schauf in Utah over the Memorial Day weekend.

The Real Housewives of Orange County alum, 35, shared a photo of herself on Instagram that showed her hiking in the mountains near Park City on Saturday, May 23. “MDW plans include: becoming a mountain woman …brb.”

She also posted a video on her Instagram Stories that showed her wearing a red puffy jacket and a gray beanie and sipping a hot drink as she walked her dog in a light snowfall.

Her new beau, meanwhile, shared a pic on his Instagram Stories that showed his stunning mountaintop home with a dusting of snow. “Still go surfing?” he asked his followers in a poll — 69 percent said yes.

Us Weekly confirmed earlier this week that the pair are dating after meeting at the beginning of March. She is currently staying with the “Life Uncharted” podcast host in Utah while her three kids — daughter Aspen, 3, and twin boys Hayes and Hart, 23 months — spend time in St. Louis with their father, Jim Edmonds, and his new girlfriend, Kortnie O’Connor.

Us broke the news in October 2019 that the blogger and the former MLB player had split after five years of marriage amid allegations that he was having an affair with one of the couple’s four nannies. Both Jim and the nanny denied the accusations.

Reality TV Curse: All 36 ‘Real Housewives’ Couples Who Filed for Divorce After Appearing on TV

Meghan has been open about wanting to move on amid her bitter divorce, telling cohost Brooke Burke in an April episode of their podcast, “I just want to hold somebody’s hand or get a hug and whether or not, in the age of coronavirus or not, as a single woman, I want to be partnered up. I want that relationship. It was never my idea to get divorced and yet here I am and I’m happier than ever now but I do want a partner.”