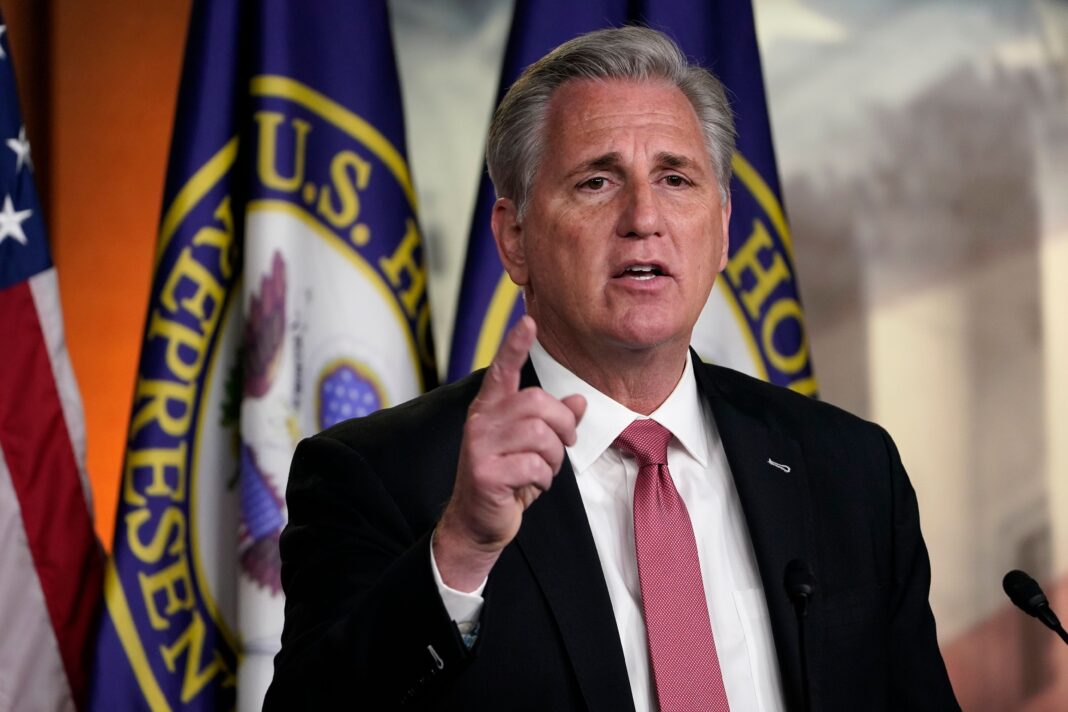 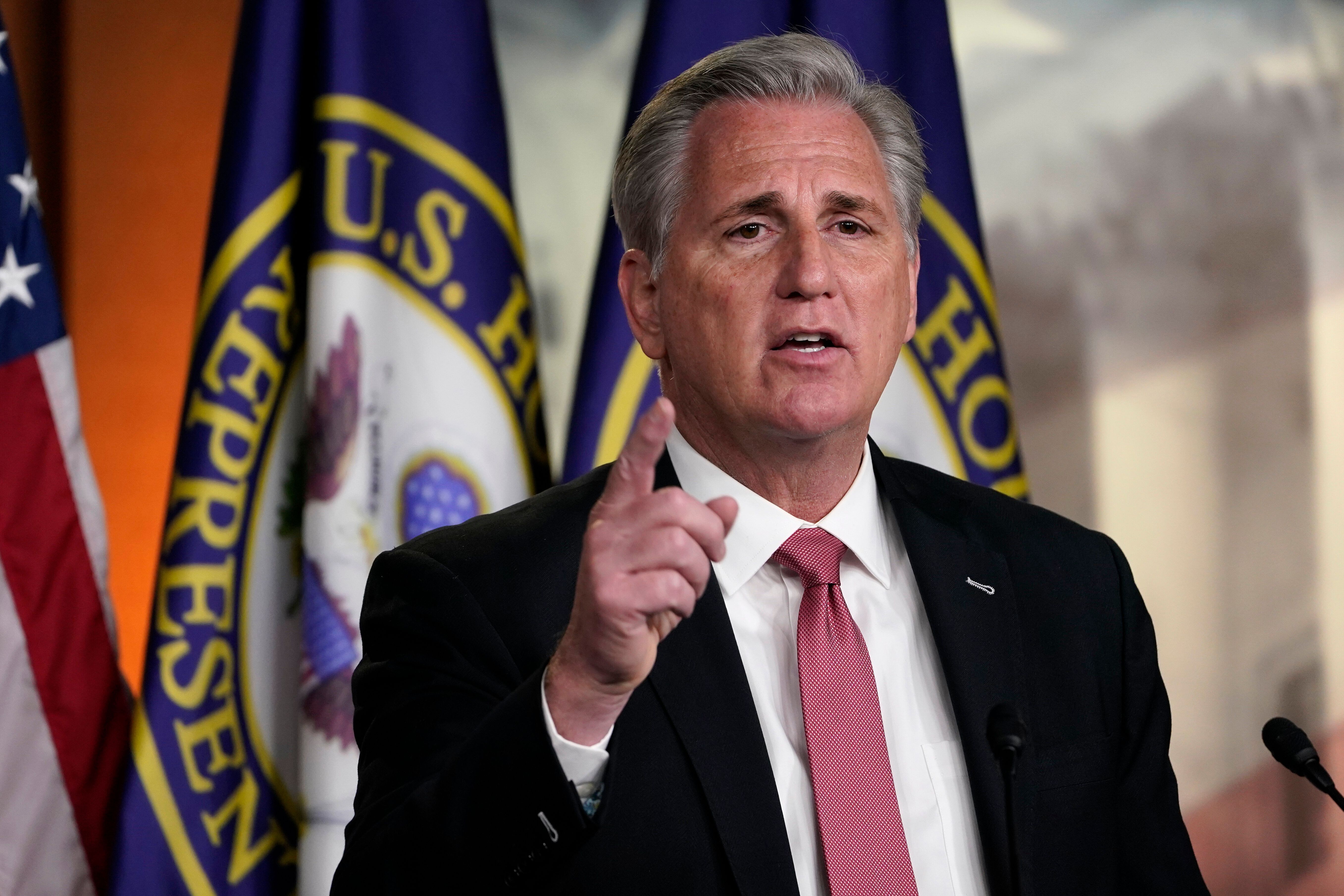 Aides to McCarthy and Greene offered no immediate comment after the two spent around 90 minutes together in his Capitol office. Their session came as the GOP faced unrest from opposing ends of the party’s spectrum over Greene and Rep. Liz Cheney, whom far-right lawmakers want to oust from her leadership post after she voted to impeach former President Donald Trump.

The strife underscores Republican fissures as the party seeks a path forward two weeks after Trump left office as the only twice-impeached president. House Republicans are effectively deciding whether to prioritize the former president’s norm-shattering behavior and conspiracy theories and retain the loyalty of his voters over more established conservative values.

“At the very moment that Joe Biden is lurching to the left is the moment that the Republican Party is lurching out of existence,” GOP pollster Frank Luntz said of the new Democratic president, who is preparing to try muscling a mammoth COVID-19 relief package through the narrowly divided Congress.

“We’ve got millions and millions of woke, motivated, America-first Trump voters that believe in the movement,” said John Fredericks, who led Trump’s Virginia campaigns in 2016 and 2020. “If you’re going to keep Liz Cheney in leadership, there’s no party.”

Without action by Republicans, Democrats were threatening to force an embarrassing House vote Wednesday on removing Greene, R-Ga., from her assigned committees.

Republicans appointed Greene to the education committee, which drew harsh criticism because of her suggestions that school shootings in Newtown, Connecticut, and Parkland, Florida, could be hoaxes. A House vote on removing her from the committee could be politically difficult for some Republicans.

The House GOP Steering Committee, a leadership-dominated body that makes committee assignments for the party, also met late Tuesday, but no decision was announced.

McCarthy, R-Calif., has stopped short of criticizing the first-term congresswoman, who was dubbed a “future Republican Star” by Trump last summer and has remained a firm Trump supporter.

McCarthy has long been close to Trump. But he’s been criticized by some Republicans, mostly quietly, for relentlessly supporting Trump’s fallacious claims of a fraudulent election last November and for not forcefully criticizing Trump for helping provoke the deadly Jan. 6 attack on the Capitol by his supporters.

Senate Minority Leader Mitch McConnell, R-Ky., and others have boosted pressure this week on McCarthy and the House GOP to act.

In a statement that didn’t use Greene’s name, McConnell usually called her “loony lies” a “cancer” on the GOP. The latest indication of his concerns about letting the GOP’s most pro-Trump, hardest-right factions gain too much sway in the party.

Also, Rep. Adam Kinzinger, R-Ill., who’s been trying to combat the GOP’s pro-Trump wing, said he favored removing Greene from her committees, saying Republicans must “take a stand to disavow” her.

Sen. Mitt Romney, R-Utah, a Trump critic and the GOP 2012 presidential nominee, said Tuesday that Republicans must “separate ourselves from the people that are the wacky weeds.”

On the GOP’s furthest right-wing, lawmakers were itching to oust Cheney, R-Wyo., a traditionally conservative and daughter of former Vice President Dick Cheney, from her post as the No. 3 House Republican. McConnell praised Cheney, R-Wyo., as “a leader with deep convictions and courage,” but House GOP lawmakers planned to meet Wednesday privately to decide her political fate.

The looming decisions over Cheney and Greene represent a moment of reckoning for a party struggling with its future.

“We can either become a fringe party that never wins elections or rebuild the big tent party of Reagan,” Maryland Gov. Larry Hogan, one of the few elected Republicans who routinely rebuked Trump, said in a written statement. Without mentioning Cheney or Greene, he added, “I urge congressional Republicans to make the right choice.”

But Rep. Matt Rosendale, R-Mont., a leader of the effort to oust Cheney, says he has enough support to succeed.

“She’s brought this on herself,” Rosendale said. He said Cheney, who only nine other Republicans joined in backing impeachment, was wrong not to forewarn colleagues about her decision.

Republicans have said that GOP members would unite against a Democratic move to remove Greene from her committee assignments. Such an effort would help Greene cast herself as a victim of partisan Democrats.

As if to illustrate that point, Greene herself tweeted fundraising appeals Tuesday that said, “With your support, the Democrat mob can’t cancel me,” beneath a picture of herself standing with Trump.

But Democrats said they think some Republicans will support ousting Green from committees and that a House vote will make McCarthy look weak and further erode GOP support among moderate suburban voters.

The handling of Greene and Cheney presented a tricky balancing act for McCarthy.

Penalizing Cheney for what McConnell called a “vote of conscience” on impeachment would be awkward without punishing Greene. Action against either risked angering the GOP’s numerous Trump supporters or its more traditional conservative backers.

“You can’t do the normal political song and dance and appease this side slightly and appease that side slightly,” said former Rep. Mark Sanford, R-S.C., who lost a 2018 party primary after clashing with Trump. “The whole nature of the Trump phenomenon is there is no appeasement.”

McCarthy has said he supports Cheney and has “concerns,” leaving his stance on her unclear.