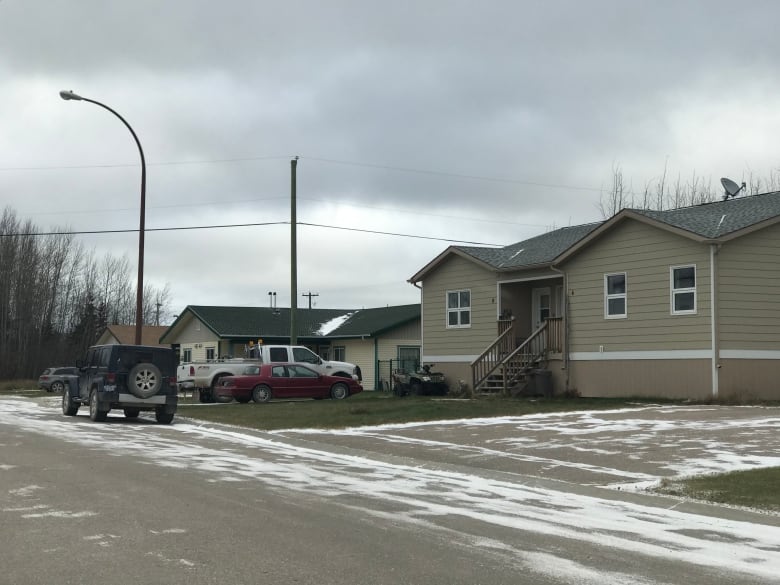 A young woman from Hay River, N.W.T., was flown to hospital in Edmonton after she was attacked and injured by a bear early Friday morning.

Roy Helmer said the attack happened just outside his home, where he managed to pull the victim to safety after fighting the animal off with a concrete statue of an angel.

“It was horrifying. It really was,” Helmer said from the front porch of his house at Saskatoon Drive and Cranberry Crescent, where the steps and front lawn were still dotted with blood.

He said he was woken at about 3 a.m. by his common-law partner who heard screams outside. He said she looked out onto the deck and saw that “the bear was on top of the girl.”

“I was yelling and screaming because I just woke up in a panic,” he said.

Helmer said the bear dragged the victim off the deck and began mauling her “aggressively.” That’s when he grabbed a nearby concrete statue and went after the animal.

“I picked that up and I run over there and I nailed it. And it backed off just enough for me to grab her feet and drag her to the bottom of the steps and get her up and into my place,” he said.

“I’m just so thankful that I could help that girl.”

Helmer said he wasn’t sure where the bear went after he hit it.

Glenn Smith, the town’s senior administrative officer, confirmed in an email to CBC on Friday that emergency workers responded to a bear attack at about 2:50 a.m.

He said medical attention was provided, but offered no further details.

RCMP later confirmed that an “injured female youth” was transferred to Edmonton for further treatment.

“The bear believed to be involved in the incident was shot and killed by Hay River RCMP members,” a statement from police read.

Staff from Environment and Natural Resources (ENR) were seen later Friday morning at a nearby wooded area, where police tape had been put up around some trees. The department confirmed on its Facebook page that it was investigating the incident.

ENR says it does not believe there is a risk to the public at this time, but did say people should remember that the area is bear country.

“Bears may be more active in the fall as they are out looking for food to put on weight for hibernation,” read an ENR statement on Facebook. “When walking in forested areas, please ensure you remain alert and aware of your surroundings.”