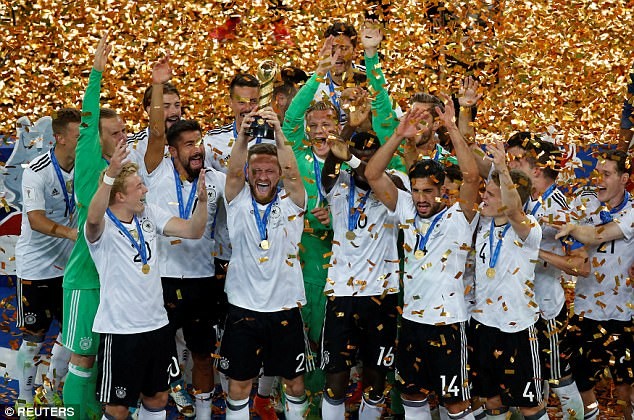 Lars Stindl struck the only goal as Germany beat Chile 1-0 to win the Confederations Cup in St Petersburg.

Borussia Monchengladbach forward Stindl tapped home against the run of play after a defensive blunder midway through the first half as world champions Germany added another major trophy to their collection.

Copa America winners Chile wasted a glut of goalscoring chances in either half and with the help of a superb stoppage-time save from goalkeeper Marc-Andre ter Stegen, Joachim Low’s side held on to win the tournament for the first time. Germany players celebrate with the trophy after winning the controversial game After the two sides drew their group game 1-1 10 days ago Chile made the brighter start in the rematch and were clearly the better side throughout most of the first period.

Alexis Sanchez flashed a shot wide in the second minute, Arturo Vidal’s effort from inside the penalty area was parried by Ter Stegen and Eduardo Vargas fired over the crossbar from 25 yards.

Another effort from Vargas was well held by Ter Stegen as Chile looked the more likely to break the deadlock.

Ter Stegen then spilled Vidal’s shot from outside the area into the path of Sanchez, but the Arsenal forward could not control the rebound and another chance went begging.

Chile defender Marcelo Diaz gifted Timo Werner the ball on the edge of the box and the Germany striker ran on and turned the ball across goal for Stindl to tap into an empty net.

The South Americans carved open the German defence again four minutes later, but the final ball into the box from Mauricio Isla flew beyond Charles Aranguiz with an equaliser beckoning. Germany finished the half strongly, with Leon Goretzka lashing an angled shot wide following Sebastian Rudy’s brilliant through-ball before Julian Draxler steered a low effort inches wide after being set up by Werner.

Mazic called on the video assistant referee just after the hour mark when Jara appeared to strike Werner in the jaw with his elbow as he challenged for the ball. But the VAR review courted more controversy when Mazic opted to show the fortunate Chile defender a yellow card.

Chile began to threaten again with 20 minutes left. Vargas’s low shot on the turn inside the area was gathered by Ter Stegen and Vidal thumped the ground in frustration after lashing his effort off target.

Edson Puch set up fellow Chile substitute Angelo Sagal for another gilt-edged chance in the 85th minute, but the latter blazed over from eight yards.

Ter Stegen denied Chile again in time added on, diving low to his left to keep out Sanchez’s free-kick from just outside the area to ensure victory for Low’s experimental squad.