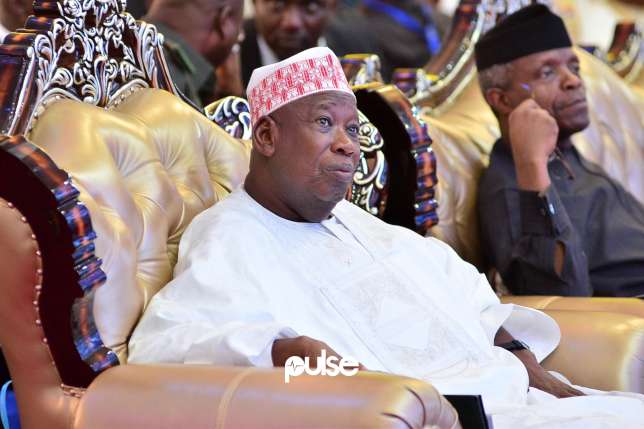 The Oba of Lagos was the star of the show on the first day of the Lagos-Kano economic summit. You won’t believe what he said to VP Yemi Osinbajo.

The Oba of Lagos, Rilwan Akiolu, had ‘stern’ words for Vice President Yemi Osinbajo on the first day of the Lagos-Kano economic investment summit which kicked off on February 28, 2018.

Osinbajo was special guest of honour. The Governors of Lagos and Kano States, Akinwunmi Ambode and Abdullahi Ganduje respectively, were special hosts.

play The Oba of Lagos, Rilwan Akiolu, arrives for the Lagos-Kano summit (Pulse)

During speech time, Oba Akiolu set the entire hall reeling with laughter with his remarks.

The traditional ruler first called Osinbajo his “teacher”, but that proved a dress rehearsal for what was to come.

To prepare the Vice President, Akiolu made reference to how then President Obasanjo went after Bola Tinubu and withdrew local government allocations of Nigeria’s economic capital to score a political point.

Osinbajo chuckled at this point.

Thereafter, Oba Akiolu shifted gears. “Mr. Vice President, please give Lagos special status o! Otherwise the house mama is building in Palmgrove, I will go and take it o!”, the traditional leader said light-heartedly, as everyone reeled with laughter.

Oba Akiolu also asked for a dual carriageway from Epe to Sagamu to ease commercial activities and improve trade between Lagos and other States.

In his remarks, Dangote said his refinery will transform the economies of Lagos in particular and Nigeria in general.

Dangote also said when the refinery commences operations, it will pump some N8trillion per annum into the Nigerian economy.

Dangote also cracked jokes of his own. “I came back from India at 3:30am to be able to attend this event, because I didn’t want the Lagos State Governor to reject my residency”, he said to raucous laughter.

Dangote promised Ambode that “we will do what is right, we will never fail you”.

The Emir of Kano who was also a former Governor of the Central Bank of Nigeria, Sanusi Lamido Sanusi, said the emergence of Donald Trump as President of the United States—with all his xenophobic and racist tendencies—presents a great opportunity for Nigeria.

Emir Sanusi noted that “it is sad that our own government hasn’t outlined a strategy for engaging China”.

He spoke about how Nigeria should tilt towards doing business with China instead of the United States and how China’s manufacturing and technological capabilities could immensely benefit Nigeria.

In his remarks, VP Osinbajo said every economic planning by the federal government has to take the Lagos-Kano partnership into cognizance given the sheer size of their respective populations and strategic locations. “Where Lagos and Kano go, Nigeria goes”, Osinbajo said matter-of-factly.

“The days when the federal government will undermine efforts of the States is well behind us”, Osinbajo pledged.

The Vice President who spoke extemporaneously for some twenty minutes amid applause from the audience, also touted the federal government’s rail and power projects aimed at reviving Nigeria’s economy.

He also noted the Buhari administration’s drive to improve ease of doing business in Nigeria and to support SMEs with power projects.

The Lagos-Kano economic summit is being put together to foster partnership that will lead to sustainable development for both States.

It is the first ever Lagos-Kano economic summit.

A Memorandum of Understanding (MoU) will be drawn at the end of discussions; wherein both States will enter into business deals based on their comparative advantages.

Former minister of national planning, Shamsudeen Usman who is the Chairman of the Kano investment summit, said it was difficult to get both Governors to agree on a date for the Lagos-Kano summit.

After several attempts to get them to agree on a date failed, Usman recalls giving up. “I asked them to call themselves. I said, look, I am only doing this voluntarily. The two Governors had to speak to themselves before agreeing on a date”, Usman said.

The event ends on March 1, 2018; with panelists conducting breakout sessions where economic and development matters will be discussed.