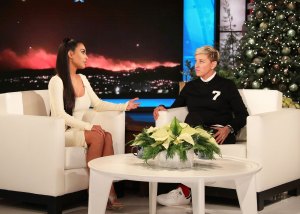 Kim Kardashian is well-aware that her sister Khloé Kardashian’s boyfriend, Tristan Thompson, isn’t used to having his every move play out on TV.

“It is awkward, especially for maybe Tristan, who isn’t used to this,” Kim, 38, said on The Ellen DeGeneres Show on Wednesday, November 21, about the Cleveland Cavaliers player’s cheating scandal unfolding on season 15 of Keeping Up With the Kardashians.

Everything Khloe Has Said About Tristan Cheating

“Unfortunately, that was what [was] going on in our lives,” the KKW Beauty founder continued. “So six months later when it replays — and [he and Khloé have] gotten through what they needed to get through — and it’s rehashed in front of everyone and everyone’s giving their opinions all over again and we’re live-tweeting and everyone’s chiming in. So that is hard for Khloé and I’m sure for Tristan, but it’s our reality.”

Kim noted that her famous family has “learned to use [our show] as a therapy, just to kind of get it out one last time with everyone else.” 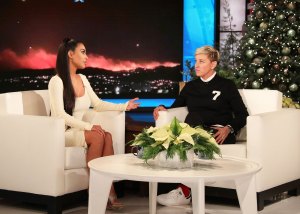 The social media mogul assured viewers that her clan tries to keep their E! reality series as candid as possible during the editing process.

“There’s nothing really that we’ve taken out,” she explained. “We will let everyone watch and be like, ‘OK, this is what I said about you, and this is how I feel about you or how I felt about you.’ It is what it is.”

Khloé, 34, gave birth to her first child with Thompson, a daughter named True, in April, just days after the NBA star was caught cheating with multiple women. The footage from the delivery room aired on the Sunday, November 18, episode of KUWTK.

“Everyone has their own s–t that I know nothing about, and mine is thrown on the public of everything,” the Revenge Body host said from her hospital bed. “It’s just a lot harder to filter through stuff when it’s this public and when I gave birth the following day. It’s just too much.”