Jailed US student flown out of North Korea in coma 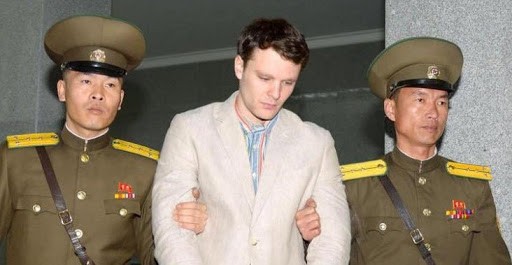 North Korea allowed a American student who fell into a coma while imprisoned in a labor camp to be flown home on Tuesday as Washington stepped up efforts to halt Pyongyang’s nuclear program.

The release of Otto Warmbier, 18 months into a 15-year sentence, came as US President Donald Trump invited South Korea’s new leader Moon Jae-In to Washington for talks on the nuclear stand-off.

Secretary of State Rex Tillerson said his department had “secured” the 22-year-old’s release in talks with North Korea and is pushing for three more Americans to be freed. It was not immediately clear if he had made any concessions.

The news came as flamboyant retired NBA basketball star Dennis Rodman — a former contestant on Trump’s “Celebrity Apprentice” reality show — flew to Pyongyang to resume his quixotic quest to broker detente between his US homeland and Kim Jong-Un’s authoritarian regime.

“Otto has left North Korea,” his parents Fred and Cindy Warmbier said in a statement to CNN. “He is on medivac flight on his way home. Sadly, he is in a coma and we have been told he has been in that condition since March of 2016. We learned of this only one week ago.”

Warmbier’s parents were told their son was given a sleeping pill soon after his trial in March last year but never woke up. A Washington Post report says the parents had been told he may have been infected by botulism while in the North Korea jail system.

Tillerson told US senators at the start of a budget hearing that the State Department had no comment on Mr Warmbier’s condition, “out of respect for him and his family.”

The United States had accused the North of using Warmbier as a political pawn, and condemned the sentence as far out of proportion to his alleged crime.

The announcement came amid tension between Washington and Pyongyang following a series of missile tests by the North, focusing attention on an arms build-up that Pentagon chief Jim Mattis on Monday dubbed “a clear and present danger to all.”

Almost immediately on taking office in January, Trump and his team — having been briefed by outgoing leader Barack Obama — declared the North’s attempts to build, test and arm a nuclear-capable ballistic missile to be Washington’s biggest threat.

Washington has stepped up pressure on China and other foreign powers to enforce existing UN sanctions, and has deployed increased military assets of its own in the region.

Now, parallel to this track, basketball showman Rodman has arrived in Pyongyang, wearing a T-shirt emblazoned with the logo of a cryptocurrency set up for marijuana marketers.

The star has visited the Stalinist state at least four times before, most recently in 2014 when he attracted a deluge of criticism after being filmed singing happy birthday to his “friend for life,” leader Kim.

Before arriving this time, Rodman told reporters that Trump would be happy with the trip, since he was “trying to accomplish something that we both need,” sparking speculation that he may be operating as an unofficial envoy.

US officials dismissed this, saying he was travelling as a private citizen, but the basketball icon is probably Kim and Trump’s only mutual friend.