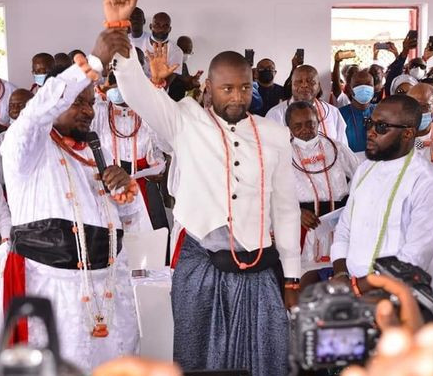 An Itsekiti Prince, Harrison Jalla, has filed a lawsuit before the Delta High Court, challenging Prince Tshola Emiko’s emergence as the Olu of Warri designate.

In the court papers filed through his counsel, Prince Jalla, a descendant of Akengbuwa 1, the Olu of Warri who joined his ancestors in 1848 and also a member of the sole Ginuwa I Ruling House in Itsekiri kingdom, prayed the court to annul steps already taken so far in the processes for selection and presentation of Prince Tsola Emiko as the Olu-designate.

Prince Jalla argued that as a member of the Olu’s Company (Otolus), he is qualified to be the Olu of Warri and has indicated his interest to participate in the selection process. He added that his immediate family has also nominated him for the royal position and only waiting for the 1st and 2nd defendants to summon a meeting to choose a successor to the traditional stool according to the customs, traditions, practice, and procedure of the Warri Kingdom.

He stated that no general meeting for that purpose was called and that the eventual choice and presentation of Prince Tsola Emiko as the Olu-designate should be declared null and void. He claims that Prince Oyoewoli Emiko and Prince Tshola Emiko are not qualified by the tradition, culture, and custom to contest for the throne of Olu of Warri.

The petitioner sought an order of interlocutory injunction from the court to “restrain the 1st and 2nd defendants jointly or severally or their agent, servants from taking any steps, actions, conduct to nominate, select or electing, screening, installing, coronating and to crown the 3rd or 4th defendant or any other person as the Olu of Warri to the exclusion of himself”.

He also sought an order of interlocutory injunction restraining the 3rd and 4th defendants from putting themselves or presenting themselves as candidates to occupy the throne of the Olu of Warri.

He prayed the court for an order of interlocutory injunction restraining the 5th to 7th defendants from deliberating any report submitted by 1st and 2nd defendants relating to a candidate’s choice to occupy the throne of Olu of Warri pending the determination of his substantive suit.

Share
Facebook
Twitter
WhatsApp
Pinterest
Linkedin
ReddIt
Email
Print
Tumblr
Telegram
Mix
VK
Digg
LINE
Viber
Naver
Previous article“So, I must be following you on Instagram?” Nollywood Director, Tchidi Chikere asks wife
Next articleCDQ was arrested for being in possession of cannabis. He has been granted bail but expected back in custody today – NDLEA