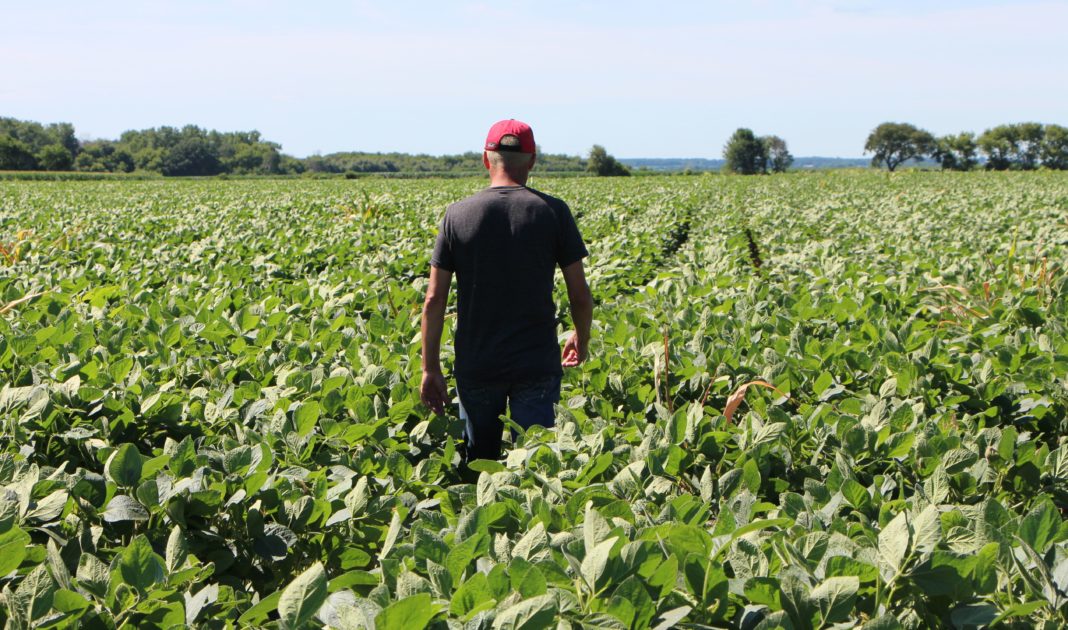 Farmer walks through his soy fields in Harvard, Illinois.

In the past year, torrential rains have dumped water on U.S. farmlands, destroying acreage and delaying crops from getting planted on time.

Now, farmers face another hurdle: a stifling heat wave that’s spreading across the United States and is expected to be the worst in the farm regions, including Oklahoma, Kansas, Nebraska, Missouri, Iowa and Illinois.

“Every time we think we catch a break, it’s just another issue we have to solve,” Adam Jones, a 28-year-old organic farmer from Illinois, told CNBC. “It seems like it never stops.”

“This year, there are farmers who are the first in their family for three generations to not grow crops on their fields,” he continued.

“That’s really hard on pride — to not be able to do the one thing you’re set out to do in life.”

Heat warnings and advisories are in effect across the country. Dangerously hot temperatures are expected to rise above 100 degrees, including 120 record-high minimum temperatures in some areas, according to the National Weather Service.

The moisture from former Hurricane Barry, which dumped rain in the Southeast last week, is also exacerbating humidity levels as the heat index is forecast to climb across the country.

High heat and humidity have farmers across the Midwest stressed about their already vulnerable corn and soybean crops.

One extreme to another

The record flooding in the Midwest and Great Plains has caused at least $3 billion in damage, left millions of acres unseeded and put crops that were planted late at high risk for damage from severe weather during the growing season.

As a result, crops are less able withstand extreme changes in weather. A heat wave would cause wet soil to crust and compact, stunting root development and ruining crops, according to Arlan Suderman, chief commodities economist with INTL FCStone in Kansas City, Missouri.

“There’s a high level of stress right now,” Suderman said. “We’ve never planted this late in the year, and the conditions in which the crops were planted make it more difficult for them to withstand heat and dryness.”

Aaron Keilen, an organic farmer from Portland, Michigan, was unable to plant on 75% of his land this year due to flooding, and was delayed in planting his crops until the last week of June, over a month later than usual. The delay will hurt his yield; after May 15, each day a farmer doesn’t plant crops means a roughly 1% reduction in corn yields. For soybeans, each day after June 1 means a 1% reduction in yields, Keilen said.

Now, Keilen said the heat wave is stunting the growth of his crops, which were planted later than usual in wet soil. While his crop insurance will be just enough to keep him in business, he worries about lost profit.

“We’ve never seen a year like this. It’s been so hard,” Keilen said. “But we see people coming together, churches offering prayer services for farmers and coming together to support each other.”

Nationwide, farmers are expected to harvest the smallest corn crop in four years, according to the U.S. Department of Agriculture. The USDA in June lowered soybean and corn production estimates, and after widespread planting delays this spring, will release a report in August with updated plantings figures for corn and soybeans.

The extreme weather also heaps more pain on an industry that has suffered from years of low crop prices, and the U.S.-China trade war that slowed down agricultural exports. In May, tariff from China on $60 billion worth of U.S. goods targeted a wide range of agricultural products.

Charlie Johnson, a farmer from Madison, South Dakota, said farmers in his community were suffering from lower prices resulting from the trade war tariffs. The flooding, he said, will further erode profits. And with respect to the heat wave, Johnson said that stepping outside to his farm has felt like walking into a sauna.

“You’re mentally struggling with issues of flooding, and then it’s hard physically to be outside in this heat to get work done,” he said.

“It’s tough on farmers and the people in our rural community. We all worry about each other.”

A study published Tuesday in Environmental Research Communications found that the frequency of extreme heat in the U.S. is projected to increase significantly, even if greenhouse gases are kept below standard levels.

“Everything is probabilities,” said Martin Weitzman, a Harvard University economics professor. “Climate change increases the probability of heat waves, but it’s still difficult to link one event to climate change.”

The latest heat wave does follow a trend worldwide: The five hottest years in recorded history have been the last five, and 18 of the 19 warmest years have occurred since 2001, according to a recent NASA analysis.

“The weather conditions are bouncing from extreme to extreme — from excessive wetness to record setting heat waves,” said Brad Rippey, a USDA meteorologist. “There’s no in between.”

Alex Jones, climate division director at the U.N. Food and Agriculture Organization, attributed the heat wave to climate change and warned farmers to “get used to it” and build resilience into the system by planting more resistant crops, even if doing so results in lower yields.

“The one key message is this is the new normal — and it’s only going to get worse,” Jones said.