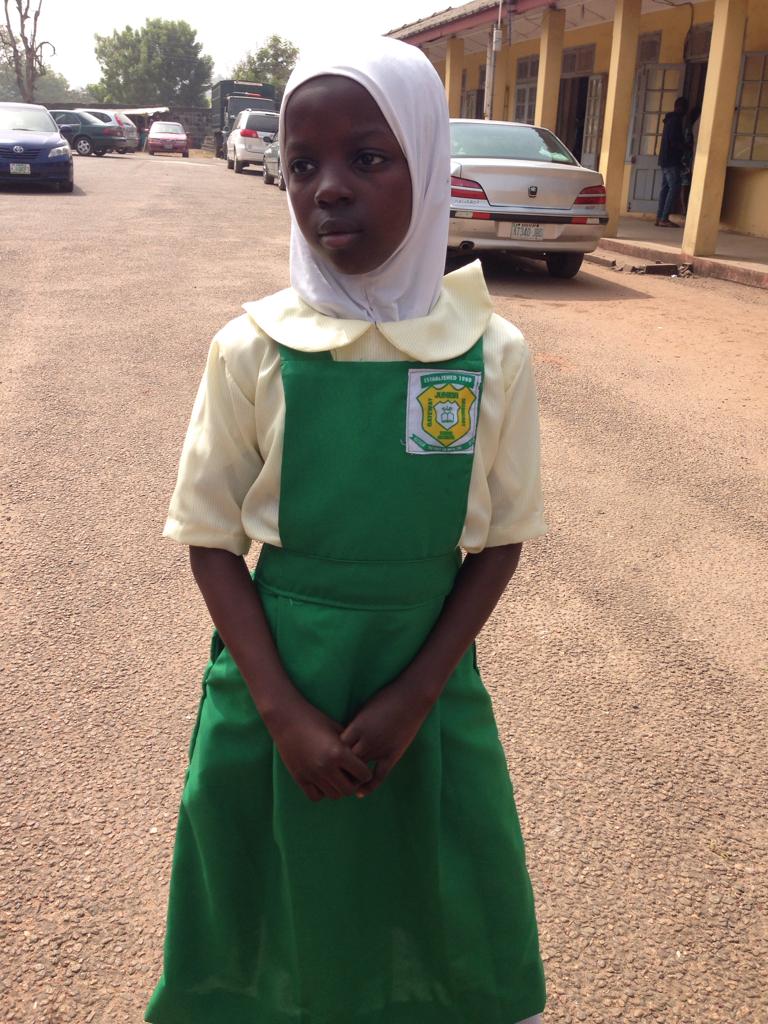 A nine-year old pupil, Aisha AbdulAleem has dragged the Ogun State government and the Principal of her school, Gateway Junior Secondary School, Mrs. Kushimo before Ogun State High Court sitting in Isabo, Abeokuta, for allegedly violating her fundamental human right to use Hijab in the school.

AbdulAleem, through her father, Mr. Muhammad AbdulAleem dragged the school principal to the court for alleged forceful removal of her Hijab and denial of access to attend classes in the school.

Other defendants who were summoned by the court to defend the allegations are the Ogun State Government, the State Attorney General and Commissioner for Justice, and her counterpart in the Ministry of Education, Science and Technology.

AbdulAleem in the originating summon filed by her counsel, Olusoji Odutan, seeks the relief of the court to declare as wrongful and unconstitutional the action of the principal to deny her access to education on account of directive of the state government for non-usage of Hijab in public schools in the state.

Odutan said that the refusal of the defendant to allow her client to use her Hijab, violates her rights to “freedom of thought, conscience and religion, freedom from discrimination and right to the dignity of the human persons and right to education”.

The claimant in the suit number AB/5271/2018 also seeks for an order of perpetual injunction restraining the state government and its officers from further infringing on her fundamental human right to use Hijab.

Odutan said, “A sum of one million naira in damages against the defendants jointly and severally for the anguish, inhuman treatment, harassment and hardship suffered by the claimant as a result of the defendants’ action”.

The case, which was mentioned for hearing for the second time on Friday before Justice Bamgbose Alabi of court 9, was adjourned till 8th January, 2018, after the lawyer to the defendants served counter affidavit to the plaintiff.

Odutan prayed the court to award the sum of N50,000 against the defendant for serving counter affidavit on him on the day of the hearing of the case, as it will take time for him to study and respond appropriately.

Counsel to the defendants, Sodipo T.M explained that the delay was not due to lack of respect for the court and desire to delay the case but that it took time to get her clients’ responses and brief.

The claimant’s father said that his daughter was denied access to the classroom at St. Peters’ College, Olomore with the principal relying on a supposed Memorandum of Understanding between the Christian Missionaries and the State Government that the students of the school would not be allowed to use hijab.

He said, on the recommendations of the principal and Zonal Education officer, Aisha was taken to Gateway Junior Secondary school for enrolment, but only to be denied access to the classroom after completing all registration formalities.

In the affidavit deposed at the court by Aisha’s father, Mr AbdulAleem Muhammad, he said, “The problem, however, started when the claimant was refused access into her classroom by her class teacher because she was wearing her Hijab.

“That upon the claimant being sent home from school by her class teacher (one Mr Shoremi E.O), I went to meet the principal of the school on Monday the 24th day of September, 2018 to ascertain what was happening. That it was during this meeting that the principal informed me that the laws establishing the school do not allow or permit Muslim students to wear hijab to school”.

Mr. AbdulAleem said, “Just like other children, Aisha sat for school entrance examination and was offered admission into secondary school. She was welcomed with hatred, malice and denial claiming that she could not wear hijab in public school. The vice principal who was the most senior officer in the school admitted her and fixed into JSS 1A but the class teacher declined, denied, refused and compel her to remove hijab before she can be admitted into her class.

“The little girl was trying to explain to her that her father has seen the VP on this issue when another female teacher came from behind to jerk the hijab off her head. This led me to seek counselling from legal practitioners and informed the Commissioner for Education at the ninth week that I have been moved to the wall”.

Commissioner for Education, Science and Technology, Mrs. Modupe Mojuta, who confirmed the development to DAILY POST, said that the state ministry of justice was responding to the matter.

Mojuta in an SMS sent to DAILY POST Saturday morning said, “The Hijab case of a JSS 1 girl at Gateway Secondary School had its first hearing in the court yesterday. The ministry of justice is responding accordingly”.