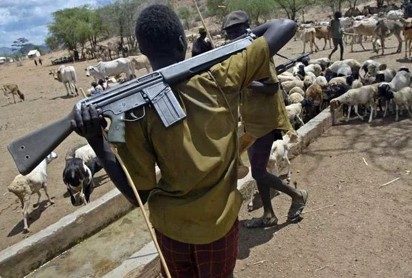 Herdsmen attack guard in Enugu
THE dreaded herdsmen have once more left sorrow in Enugu community, machetting a security guard.The incident which occurred in Okpanku community, Aninri Local Government Area of Enugu State, left a security guard down with substantial injury. It was gathered that the incident occurred, Easter Monday, when herdsmen defiled a security guard attached to a private residence and invaded the compound. herdsmen According to community sources, “the herdsmen and their cattle were passing through the community when suddenly, the herders entered inside the compound of one Barrister Eric Ogudu and started plucking mangoes in the compound. “The security guard in the compound (name withheld) tried to stop them but they refused and in the ensuing commotion, the herdsmen gave him several machete cuts on his arms and shoulder.” “The guard started shouting Fulani people have kill me! And immediately the attention of the people were drawn and the villagers that came out started pursing them”, a source disclosed, adding that the herders reportedly ran into the bush. It was further gathered that owner of the compound, Barr. Eric has already made statement to the police at Aniri Divisional Headquarter in Okpanku, and a team of policemen have been deployed to the community who are currently trying to calm the youths of the community who are bent on fishing out the herdsmen who carried out the attack. The spokesman of the police in Enugu, Superintendent of Police, Ebere Amaraizu has confirmed the attack on the community. According to him, “Police have commenced investigation into the matter.”
Share
Facebook
Twitter
WhatsApp
Pinterest
Linkedin
ReddIt
Email
Print
Tumblr
Telegram
Mix
VK
Digg
LINE
Viber
Naver
Previous articleinvolving wife of Abia state governor’s convoy, 2 confirmed dead in auto crash
Next articleNigerian female doctor who has not been paid since July last year and still goes to work, vows never to treat any Lassa fever patient until protective kits are provided