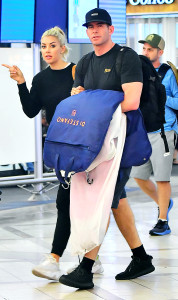 Is Tarek El Moussa The One? Heather Rae Young sure thinks so.

The Selling Sunset star, 31, got candid about why she thinks her Flip or Flop boyfriend, 38, could be her love for life, if their relationship progresses on the same track it’s been on.

“We are just really, really happy,” she told Us Weekly exclusively. “He has all the qualities that I would want in someone. I think we just need to spend more time together before we can make that decision.”

Young and El Moussa confirmed their relationship in July when they were photographed kissing on a boat at the Portofino Hotel & Marina in Redondo Beach, California. Though the Netflix star wasn’t ready yet then to come out about her romance, she’s embraced the love from Flip or Flop viewers.

“When those paparazzi photos came out, it definitely was sooner than we expected to announce our relationship,” she said. “But you know, it’s been mostly positive feedback and Tarek’s fans have been wonderful to me and really accepting.”

Despite their dream relationship now, the real estate agent revealed that she actually turned down El Moussa after they met on 4th of July. It wasn’t until she got to know the HGTV star better that she realized how compatible they really were.

“I had been single for a little while, and he just has this special light about him,” she said. “His smile and his personality, I felt like he was such a genuine, kind person. We texted back and forth a little bit, and we just bonded.”

She added, “I had been dating and you know it’s tough to date in L.A. I felt like Tarek was just a real person.”

As for what the two talk about, the Oppenheim Group employee revealed that she and El Moussa have a lot to bond over, specifically their similar careers in real estate and reality TV.

“We’re both very supportive of each other’s careers and really understanding of what real estate involves and also being on TV,” she said. “You know, he’s been doing this a lot longer than I have, so he’s been able to guide me and you know, give me some great tips on real estate.”

She added, “Also when I was filming he watched my show [Selling Sunset], he loved it and was giving me some feedback on what he thought.”

Though Young doesn’t have plans for a home-renovation show with El Moussa in the near future, she isn’t ruling the possibility out.

“We both are busy doing real estate,” she said. “But I think once we’ve been together longer,  that would be a discussion maybe and see what the network would say.”

However, Young admits that a guest appearance on Flip or Flop might be a bit trickier, considering that she and her beau are on competing networks.

“There’s a chance,” she said. “But you know, I think the networks would need to discuss that and see if we could make that happen.”

While Young hasn’t met her boyfriend’s ex-wife and Flip or Flop costar, Christina Anstead, yet, the realtor has been introduced to the couple’s kids, daughter Taylor, 8, and son Brayden, 3.

“His daughter and her cousins made up a song and a dance for us, and it was really cute,” she said of her first time meeting El Moussa’s children with Anstead. “His daughter was super excited to meet me, which made me feel more comfortable. Since then her and I have hung out once or twice, and it’s been really great.”

Young even revealed that she’s gotten Taylor’s stamp of approval.

“His daughter, she’s almost 9, and I think she’s been excited for him to meet someone that he really cares about,” she said. “They’re really close, so she sees that he’s happy, and that makes her happy.”

As for if she and El Moussa want kids of their own, the duo have already started talking about marriage and future.

“I’m almost 32, so I’m definitely not shy about what I want in my future, and marriage is definitely something that I would love,” she said. “I’m not ready at the moment, but I think by him having children already and I can spend time with them, that’s enough for me right now. I’m really loving the quality time I get to share with them.”