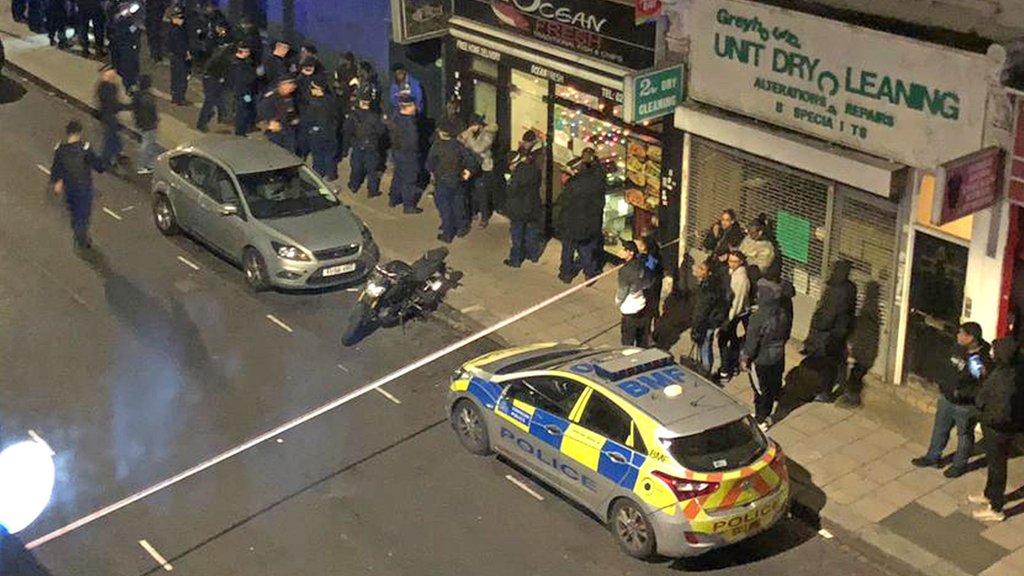 Thirty-nine people at a house party were arrested on suspicion of attempted murder after a man was stabbed in west London.

The man, thought to be in his mid-30s, was found with life-threatening wounds when police were called to Fulham Palace Road, Hammersmith, at 01:00 GMT.

The Metropolitan Police said the victim was chased by men and women following “a minor argument” in a shop.

The suspects were seen going into a property where there was a party.

Officers tried to speak to those in the flat, but when they failed to co-operate 39 people were arrested.

One witness said the group were “lined up and interrogated” for about an hour in the street.

They are being held in custody while inquiries continue.

The injured man was treated at the scene by officers and paramedics. He is critically ill in hospital.

Supt Mark Lawrence said: “Whilst it is unusual for so many people to be arrested in the early stages of an investigation such as this, due to a lack of co-operation and the necessity of securing essential evidence following a serious assault this action was appropriate.”

A tattoo parlour, the Southern Belle pub and a Sainsbury’s Local supermarket are all within a police cordon, according to BBC Radio London’s Greg McKenzie who has been reporting from the scene.

Blood was seen on the pavement within one of the three taped off areas. Two knives were found nearby, said police.

One woman said she saw a group of people running before hearing someone shouting: “Get him.”

“All of a sudden, all of them in a rush together ran in that door [to the flat] together,” she added.

The witness, who did not want to be identified, said she saw the victim being treated by paramedics. She indicated he had been stabbed in the chest.

A neighbour of the flat in Greyhound Road, where the arrests are thought to have been made, said the party had seemed “quite relaxed and chilled”.

“We just heard normal talking. It sounded like squealing girls like you get on a night out,” she added.

Another neighbour, Mason El Hage, 22, said: “I have never seen something like that in my life. It was very extreme in terms of the amount of people involved,” he said.

The graphic designer said he initially thought it was a drugs raid after he heard noise and dogs barking at about 01:30 GMT.

“After that, three riot vans rocked up and about 50 police officers marched down the road, went into the house next door and brought around 30 to 40 people outside,” he said.

“They lined them up and interrogated them for about an hour.”

Mr El Hage said the group, including young men and women, were arrested in “single file” in a “very, very swift operation”.