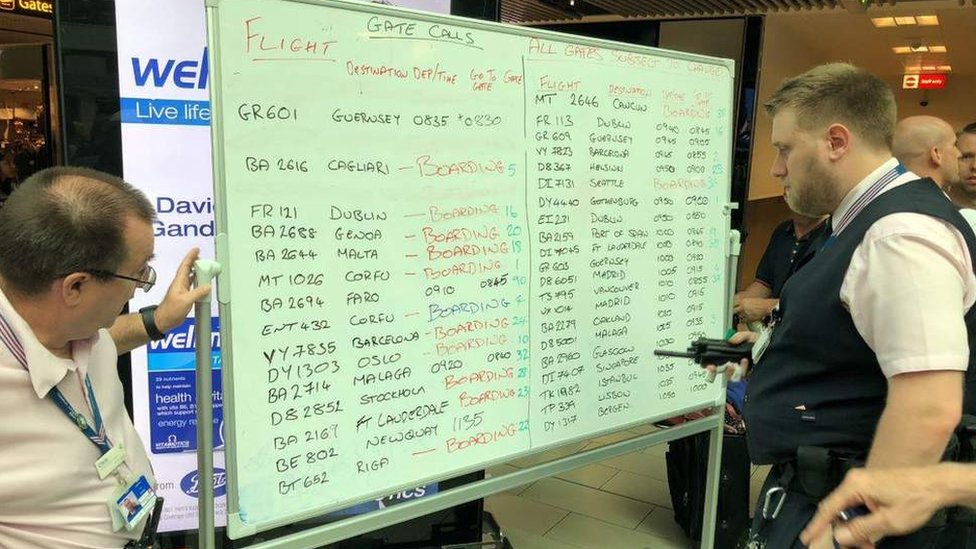 Staff at Gatwick Airport had to write flight information on whiteboards for most of the day due to a technical problem with its digital screens.

Vodafone provides the service, and said a damaged fibre cable had caused the information boards to stop working.

In a statement at 17:00 BST, a Gatwick spokesman said the issue had been resolved and flight information was being displayed as normal.

“Tens of thousands” of people departed on time and no flights were cancelled.

Apologising to customers, he added that the airport’s “manual contingency plan”, which included having extra staff on hand to help direct passengers, had worked well.

The airport earlier said a “handful of people” had missed their flights due to the problems.

A spokesman said the information boards stopped working “earlier this morning” but was unable to give a precise time.

Passengers earlier took to social media to vent their frustration at the loss of the flight information screens.

Helen Walsh tweeted that the situation was “absolute carnage”, while CheerfulChappy said Gatwick Airport was “an embarrassment to the UK, letting a simple IT problem knock out all of the departure info screens”.

Elizabeth Humphries tweeted that the situation was “appalling”.

“Thank goodness I have eagle-vision and can read messy writing from a distance,” she said.

But actress Kirsty Malpass praised the airport staff, saying a lot of people were “scurrying around with markers and erasers” and it was “surprisingly calm and ordered”