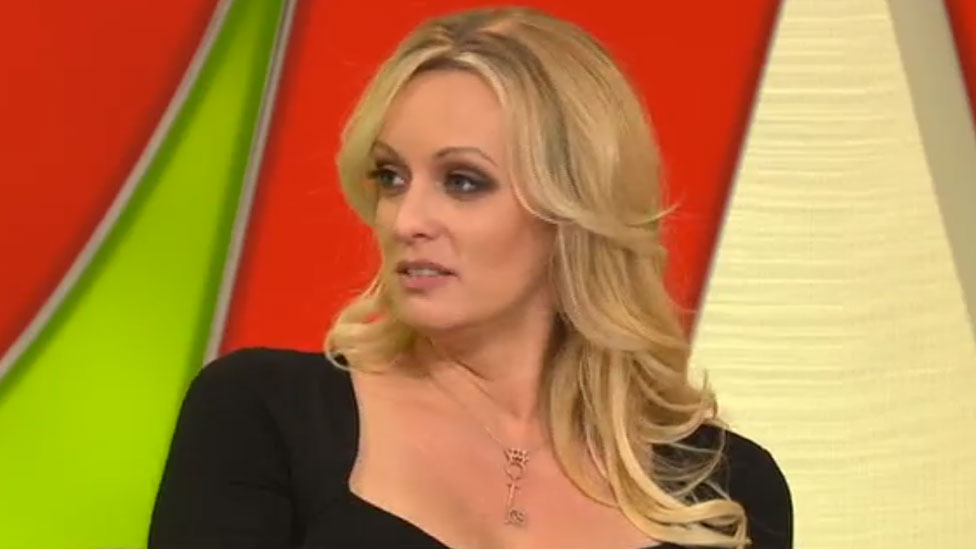 Adult film star Stormy Daniels has appeared on TV to explain why she did not appear on Celebrity Big Brother.

She denied asking for more money and accused the show’s producers of trying to “deport” her.

“It was never about the money,” she said, insisting she’d always asked for her fee to be donated to charity.

Daniels – real name Stephanie Clifford – made headlines after it was alleged she had slept with Donald Trump in 2006, which the US president denies.

The 39-year old had been due to enter the Celebrity Big Brother house last Thursday.

On Friday, her lawyers issued a statement claiming the Big Brother producers had tried to “control” her and “script a result” she didn’t agree with.

Celebrity Big Brother broadcaster Channel 5 denied the allegations, claiming: “Five hours before the live show, Stormy informed us that she wished to simply appear on launch night and then leave.”

In an interview broadcast on Monday’s edition of ITV’s Loose Women, Daniels said a development in the ongoing custody battle for her seven-year old daughter had made her feel “uncomfortable” about staying in the house.

“Being a mum comes first,” Daniels said, “and I wanted to be able to talk to her with everything going on.”

Daniels said she had still wanted to make an appearance on the show, to apologise for her non-appearance and explain the situation to her fans.

She claimed it was agreed she would enter the house on Friday morning, instead of Thursday’s launch night, and spend the day in the Big Brother house.

Her stint, she went on, was to have finished with a visit to the diary room and an explainer about why she would not be taking part in the rest of the series.

“I thought it was a great way to salvage some of the show,” the US star said. “I didn’t want to let down the British fans.”

Daniels said it had been agreed that her “day rate” would have been donated to charity.

Daniels claims the Celebrity Big Brother producers “came back a couple of hours later and said ‘You’re either going to go on, stay in the house, follow the contract to a T or we’re deporting you at 6am [on Friday].’

“There was no way I was going to get on a plane and wake up to the headlines that Stormy Daniels gets deported from England, without being able to tell my side of the story.

“It was never about the money – I was trying to give the money away.”

In a statement, Channel 5 did not address allegations that attempts were made to “deport” Ms Daniels but said reports she asked for more money were “completely false”.

The channel added: “Producers discussed a variety of options with her but weren’t able to agree any acceptable conditions for her entering the house.

“Our focus is now on making a brilliant series with our fantastic celebrities.”

Loose Women said Daniels waived her appearance fee from ITV, asking instead for it to be donated to Oxfam.