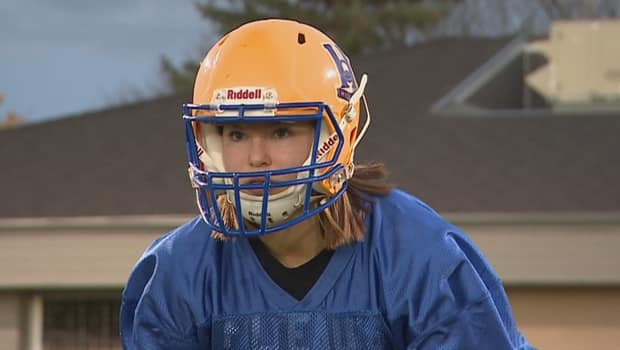 Emmarae Dale has been part of big games her entire life. She knows what it’s like to have pregame jitters, both as a fan and as a player.

But nothing could have prepared her for the first time she stepped on the field for the first practice as a member of her hometown Saskatoon Hilltops.

“I was at work and two hours beforehand I was so nervous. This was actually happening. My heart was racing. I was sweating. I had to tell myself to breathe. I knew I was stepping into something big,” said the 22-year-old.

She met the moment.

On the same field on the east side of Saskatoon, not far from the banks of the South Saskatchewan River, where Dale spent hours as a young girl watching her older brothers practise for the ‘Toppers, she put on her cleats, heaved on her shoulder pads and snapped on her blue-and-gold helmet.

In that moment, during that first practice in early September, Dale became the first woman on the roster of a Canadian Junior Football team. 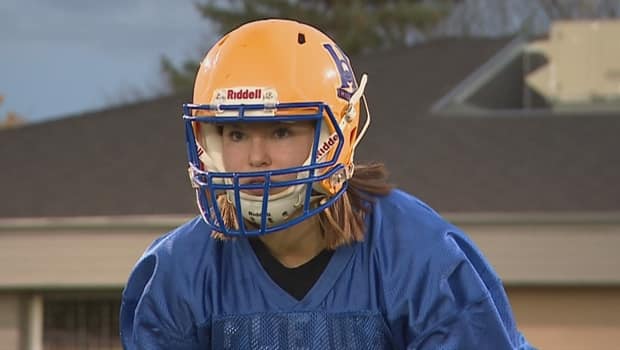 The 22-year-old from Saskatoon embraces her role model status as the first woman to play in the Canadian Junior Football League. 5:25

“I realized the responsibility of it after that first practice,” she said. “I just thought I was a kid taking that next step. But then when it started sinking in, I definitely understood I was part of something bigger than myself. It’s going to mean a lot, to a lot of people everywhere.”

Dale is getting the full Hilltops experience so far at practice — being hit and tackled with the full weight of each player. It’s exactly how she wants it.

“I’ve taken some pretty good shots. Pretty bruised up. No one is taking it easy and they’re showing me what the league is about. That was expected. This is a challenge. A step up. You just have to persevere through it,” she said.

“She’s always stood out. We scouted her during her time with the Valkyries,” he said, referring to the Saskatoon team of the Western Women’s Canadian Football League. “I have two daughters myself. This needed to happen. I’m just lucky to be a part of it.”

She’s the perfect candidate if there ever was one. This is not a PR stunt.— Hilltop team president Chris Hangen-Braun

Chris Hangen-Braun, team president and a former player on the Hilltops, says the support in the football community for having Dale on the team has been overwhelming.

“She’s the perfect candidate if there ever was one. This is not a PR stunt,” he said.

And more than anything, Dale knows who’s watching her every move.

“This is going to pave the way for other girls and hopefully inspire girls everywhere that sports just don’t have to be for boys,” she said.

Dale says she doesn’t mind shouldering this responsibility — she has a football family walking alongside her every step of the way. The youngest of six children, including four big brothers, Dale learned how to tackle in the family’s backyard at an early age. They all played sports, running from field to field.

Trying to keep up with it all are a very busy and proud mom and dad, Wendy and Darren Dale.

“We have a calendar that I started making when the kids were young,” Wendy said.

“It’s about five feet long. Everyone’s practices and games were on there. Soccer. Hilltops. We were always trying to figure out where we could go to see our children play.”

That calendar became Darren’s lifeline in the early days.

“The big calendar was a godsend for me balancing work and all the games. To be able to come downstairs and look at the calendar at the end of the day.”

The Dale house was humming with a competitive spirit, they say, from card games to street hockey (Emmarae always had to play goalie) and football games in the backyard that started out as touch football and ended in tackling. The Dale children were constantly trying to find an edge to stand out.

“Emmarae was always there playing. She was always much smaller than us but she still played to compete,” Anthony, one of her brothers, said. “That’s where the edge comes from. We all hate to lose.”

That feeling is shared by another brother, Donovan.

“Brothers aren’t allowed to fight sisters,” he said, laughing. “But scrappy touch football always turned into tackle football and she was fierce.”

The two both won championships with the Hilltops. Emmarae was their biggest fan, even going on one epic cross-country train trip with her mom to watch them compete in one of the title games.

“I made Emmarae come on the train with me to Hamilton,” Wendy said. “We left on a Thursday, we arrived one hour before the game. Three-day trip. The boys won and we got back on the train and headed home. That was a special time with Emmarae.

One of Emmarae’s favourite traditions after wins was a sweaty celebration picture with her brothers towering over her.

“They were my heroes. I idolized them. And I have countless memories of them just sitting on me. Squishing me. So when I first got hit by one of these big [offensive] linemen out here, I was like, ‘This is not an unfamiliar position to be in,'” she said.

Looking back on it all, Dale is in awe of how her parents juggled six kids and their work and made it all seem smooth and flawless.

“Growing up you don’t realize what they do for you. I don’t know how they did it and how they got through it. I can’t thank them enough for everything they gave us. The love and support they gave us was incredible,” she said.

And now the Dale family is back for one more push at a national title for the Hilltops. Emmarae has one year of eligibility left, because of age restrictions, pushed over to next season because of the pandemic.

When Anthony and Donovan’s careers ended they say they never thought they’d be back at the field on game day.

“She had to come watch us. Now we get to say to our kids, ‘Let’s go watch Emmarae play football today,'” Anthony said. “It’s just so surreal to think we can even say that. Aunty Emmarae plays for the Hilltops and the kids know that’s where we played. It’s just a really special thing.”

Wendy, the football mom, says she couldn’t be happier to be back.

“When I came to watch Emmarae’s first practice I had that sense of, I’m home again,” she said. “The coaches were calling out to me by name. We’re just so, so proud of her.”

And for Darren, the entire journey has been something he could have never imagined — overrun with emotion when he talks about it.

“Emmarae is my youngest daughter. My baby girl. And probably the last person I thought would be on the Hilltops football team,” he said. “As she always says it is surreal. It’s so humbling. I think she’s going to do us proud.”

Standing together on a football field with her family — Emmarae says she’s unafraid of being the first and ready to challenge any naysayers who might question her ability.

“Just watch me play and you’ll see,” she said. “It’s not a joke and not something I’m taking lightly. Come watch me.”