Father of 21-year-old student who fell into sea in N.L. recounts tragedy 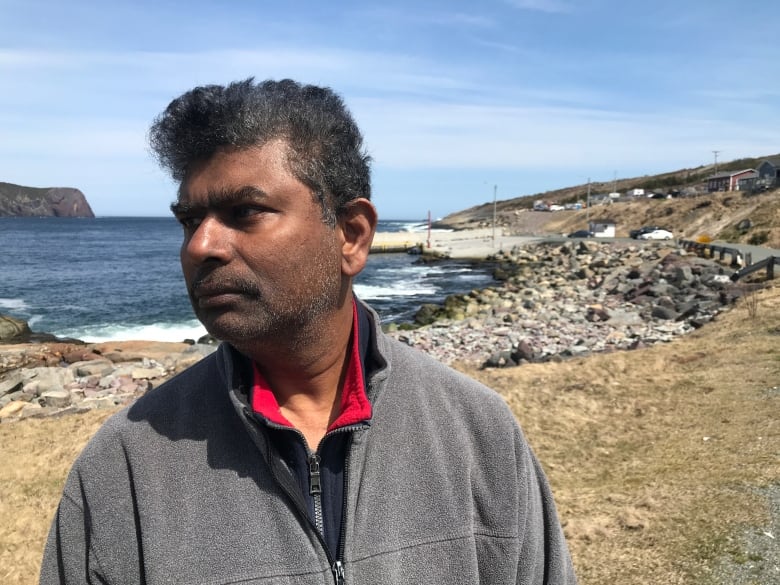 Supul Jayasinghe had just closed the books on his final exam at Memorial University. To celebrate, the 21-year-old biology student and his family strolled along the coast of Flatrock, N.L., Wednesday evening, soaking up the sun.

“We simply looked around [at] the sea,” Don Jayasinghe, Supul’s father, told CBC News on Thursday — at the very place where their outing took a tragic turn in a matter of seconds.

Don Jayasinghe said his son, running after the family dog Neo, slipped on the rocks and ended up in the water as his parents looked on.

His father said Supul, surprised by ending up in the water, initially took the fall lightly. “But when he was trying to come out … whatever he touched, slipped,” Jayasinghe said.

His son tumbled in the waves as the current carried him farther out from shore.

“I was following him, talking to him. And suddenly he understood it is difficult. He asked my help, ‘Dad, help me,'” Jayasinghe said.

His father tried to throw the dog’s leash to Supul, and nearly fell into the water himself. His son seemed to float, treading water, as darkness fell.

Supul’s family expressed stoic acceptance of their loss Wednesday, speaking openly to CBC about the ordeal.

“I am a Buddhist. So everything happens with a reason. So therefore I have the courage still to stand and talk to you,” Jayasinghe said. “What has happened has happened.… He’s gone.”

Jayasinghe described his son as a “very beautiful soul,” a well-rounded young man who excelled at sports and in school. He volunteered and had aspirations in medicine, and as a teenager even earned a private pilot’s licence and a write-up in the local paper, according to his tearful mother, Chandima.

His father said Supul dreamed one day about joining Doctors Without Borders, travelling the world to help the sick, even talking about giving up his salary to locals who needed the money more.

“That’s how he was.… All the time he was thinking [of] other people, not himself.”

The Jayasinghe family moved to Canada from Sri Lanka to encourage that dream. They spent years in Ontario, then Alberta, before settling in Newfoundland and Labrador in 2017.

“So far,” Jayasinghe said, “we don’t have any idea what’s next.”

Standing near the shore that took his son, Jayasinghe implored others to stay vigilant near the icy water.

“Young people, please listen to your parents.… Don’t ignore their advice,” he said firmly. “Because if our son heard our words — ‘come back, come back, don’t go there, don’t go there’ — he would have been still alive today.”

Search continues in air and at sea

The sea and air search continues Friday. A spokesperson from the Royal Newfoundland Constabulary is expected to speak with reporters around noon NT.

Here’s some video of the helicopter that is searching the harbour. <a href=”https://t.co/X8iP40dmzz”>pic.twitter.com/X8iP40dmzz</a>

A helicopter from 103 Search and Rescue Squadron in Gander, a Canadian Coast Guard ship from St. John’s as well as RNC officers spent Wednesday night searching the area, after police were alerted to the missing person.

Officers arrived in the Flatrock area around 8:15 p.m., according to an RNC report, with the Cormorant helicopter arriving shortly afterward. They scoured the coastline and waters, at times using flares to illuminate the area.

Just after 2 a.m., police announced on Twitter they had scaled back their search efforts, focused on the water and shoreline, until daylight.

By daybreak Thursday, both a Canadian Coast guard vessel and Zodiac were present at the scene, with a command centre from the Rovers Search and Rescue from Paradise also set up, searching throughout the day.

As of Friday morning, rescuers hadn’t yet deemed the operation a recovery mission. If that happens, and if a body is eventually found, the family says it won’t change how they feel.

“It doesn’t return our son,” Jayasinghe said. “Our son is gone forever.”