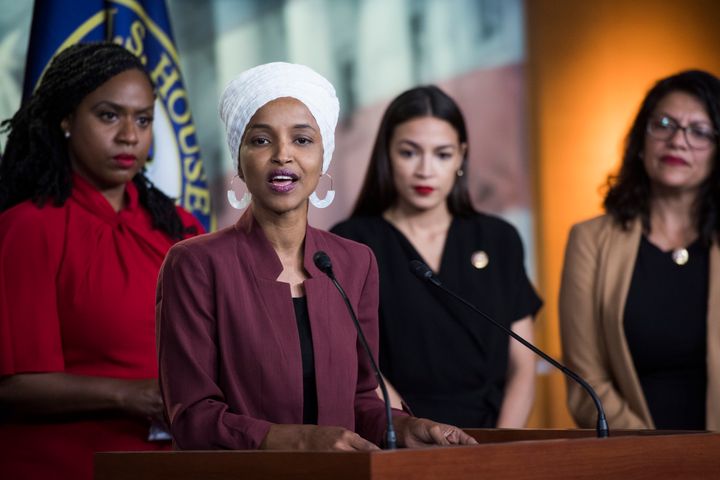 Reps. Ilhan Omar, Rashida Tlaib, Ayanna Pressley and Alexandria Ocasio-Cortez are virtually certain to head back to Congress. And new allies are joining them.

A 2020 election cycle that began with the defeat of progressives’ preferred presidential candidates is coming to a climax with a string of progressive victories in the House of Representatives.

Melton-Meaux’s bid was one of the best-funded primary challenges against an incumbent progressive elected official in some time. As of late July, his campaign ― and outside groups supportive of his candidacy ― had spent over $6 million on electing him and unseating Omar. Omar approximately matched him in direct campaign spending, but fell well shy in outside support.

In the end, though, it wasn’t even close. The race was called in Omar’s favor less than 90 minutes after polls closed, handing her an 18-point win with almost 99% of the votes counted.

With Omar’s race over, all four members of the “Squad” of progressive first-term members of the House have won their primaries. Given the overwhelmingly Democratic character of their districts, that means they are all but officially headed back to Washington next year.

The fourth Squad member, Rep. Ayanna Pressley of Massachusetts, is unopposed in her Sept. 1 primary ― as well as the general election in November.

Justice Democrats, the left-wing group that recruited Ocasio-Cortez and remains the main institutional force behind the Squad, celebrated Omar’s election win as a vindication of its project of electing more progressive Democrats.

“Despite all the manufactured hype and money spent attacking them, the Squad is winning, it’s growing, and is here to stay,” Justice Democrats executive director Alexandra Rojas said in a statement.

The Working Families Party, which spent nearly $100,000 on super PACs to reelect Tlaib and Omar, had a similar message.

The likelihood of unseating an incumbent member of Congress drops precipitously after their first reelection fight. That suggests that for now, the Squad is safe.

The question in the next Congress is whether the four-member crew comes into its own as a subgroup within the Congressional Progressive Caucus capable of leveraging its votes as a bloc, particularly on party-line legislation where Democratic leaders need their votes.

Should they choose to go that route, they will have at least two additional Squadmates on their side. Cori Bush of Missouri and Jamaal Bowman of New York unseated veteran incumbents this year, running on similar ideological platforms.

And back in March, Marie Newman ousted conservative Democratic Rep. Dan Lipinski of Illinois. Newman had the support of both Justice Democrats and mainstream Democratic groups like EMILY’s List.

Still, there are signs that Omar, in particular, must remain vigilant against threats from her right. While her victory margin is wide, she won less than 60% of the vote ― a share of the electorate that is generally a troubling sign for an incumbent. Missouri Rep. Wm. Lacy Clay won just under 57% of the vote in his 2018 primary; Bush returned to unseat him this cycle.