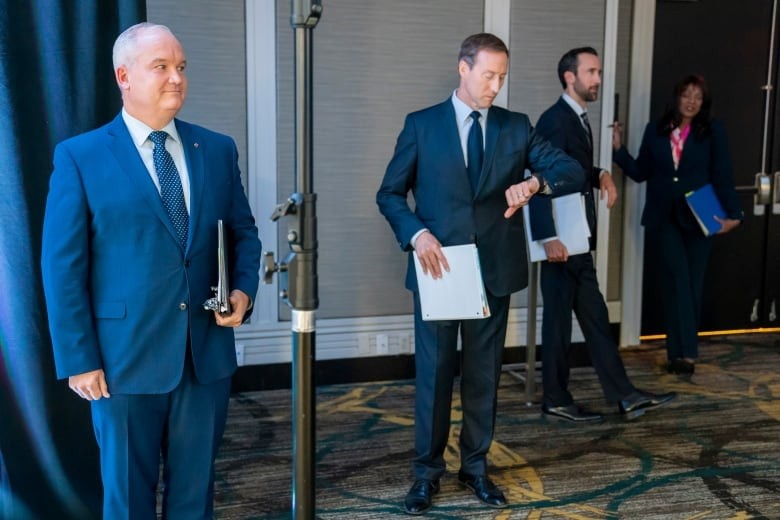 Erin O’Toole’s decision to issue a 595-word statement on Sunday about his political beliefs suggests he’s at least a little worried about his public image.

And he might have good reasons to worry. But the question of what kind of conservative Erin O’Toole wants to be is still difficult to answer.

“If the Liberals want to label me as ‘far right,’ they are welcome to try,” O’Toole said in a statement sent to reporters Sunday morning. “Canadians are smart and they will see this as an attempt to mislead people and import some of the fear and division we have witnessed in the United States.”

The “extreme right” allegation was contained in a fundraising email the Liberal Party sent to its supporters last week. The message was part of a week-long effort by Liberals to link O’Toole’s party with the Trumpian style of politics. The Conservative Party had, for example, previously accused the Liberals of “rigging” the last election. O’Toole, the Liberals noted, campaigned for the party leadership on a pledge to “take back Canada.”

However much O’Toole might want to seem undaunted in the face of Liberal charges, he’s not in a position to assume these attacks will fail. Donald Trump’s politics have been shown to be even more poisonous than previously understood. Anything that sounds even remotely similar to Trump is in danger of being considered unacceptably toxic in Canadian public life.

Pitching for the ‘centre’

Given the threat of a Trumpist stain and the weakness of O’Toole’s brand, some kind of response to the Liberals’ criticism was probably necessary. But simply not being Trump is a poor measure of anything and O’Toole’s weekend statement also points to a more interesting matter for the Conservative leader — defining his approach to conservatism.

In his defence, O’Toole touted a number of his beliefs and political positions on Sunday. He has said he wants the Conservative Party to welcome “all Canadians, regardless of race, religion, economic standing, education, or sexual orientation” and to “govern on behalf of all Canadians.”

He says he is pro-choice and believes the party must take inequality “seriously.” He has “lamented the decline of private sector union membership” and “raised the unfairness of the blood ban for gay men.” His first question in the House of Commons as Conservative leader was about reconciliation with Indigenous peoples.

“The Conservatives are a moderate, pragmatic, mainstream party — as old as Confederation — that sits squarely in the centre of Canadian politics,” O’Toole said, adding that he would “work tirelessly to restore public confidence in their political leaders and federal institutions.”

But Sunday’s statement didn’t include O’Toole’s previously stated desire to “fight” to “defend our history, our institutions against attacks from cancel culture and the radical left.” That was an idea that O’Toole put front and centre when he announced his candidacy for the Conservative leadership in January 2020.

In that campaign — which raised questions about O’Toole’s edgier new tone — O’Toole touted himself as the “true blue” Conservative option and suggested that Peter MacKay, the early frontrunner, would turn the Conservative party into “Liberal party lite.” The choice, O’Toole said, would be between running on principles and running toward the “mushy middle.”

During that leadership race, O’Toole was also one of only two members of the party’s Ontario caucus to vote against calling on fellow leadership candidate Derek Sloan to apologize for Sloan’s attack on Theresa Tam, Canada’s chief public health officer (Sloan was the other member).

On Monday, after it emerged that Sloan had received a donation from a white nationalist, O’Toole announced that he was moving to eject Sloan from caucus and would prohibit him from running as a Conservative in the next election.
- Advertisement -
Share
Facebook
Twitter
WhatsApp
Pinterest
Linkedin
ReddIt
Email
Print
Tumblr
Telegram
Mix
VK
Digg
LINE
Viber
Naver

New hotel quarantine rules for air travellers are now in effect. Here’s what you need to know

‘Everybody sees her exactly as a girl’: 9-year-old Sask. girl embraces identity through makeup, ribbon skirts

Ford recalls more than 8,500 vehicles in Canada over airbags that can explode, hurl shrapnel