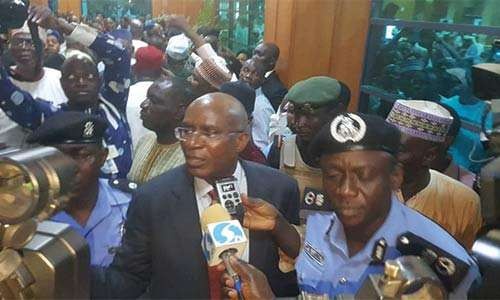 Senator Omo-Agege was suspended for 90-legislative days over matters bothering on the reordering of elections.

Some Nigerians were at the National Assembly on Wednesday, April 25, 2018, to protest the suspension of the Senator representing Delta Central senatorial district, Ovie Omo-Agege.

Senator Omo-Agege was suspended for 90-legislative days over matters bothering on the reordering of elections.

In a letter addressed to the Senate President, Bukola Saraki, the group of protesters under the auspices of Delta Central Collective were demanding the immediate reversal of Omo-Agege’s suspension.

The protesters threatened to resort to individual or collective representation if their demand was not granted.

The letter reads: “On Thursday, April 12, 2018, you moved the Senate to again violate the letters and spirit of the Constitution of the Federal Republic of Nigeria, 1999 (as amended) and other extant laws by purporting to suspend our Distinguished Senator Ovie Omo-Agege from the Nigerian Senate for 90 legislative days. By this act, you are now denying our over six (6) million people of Delta Central Senatorial District representation in the Senate. In proper context, we have been constructively and effectively expelled from the 8th Senate. We totally reject this act of impunity as it violates our people’s inalienable constitutional right to elect a Senator of their choice to represent them.

“The ‘suspension’ of our Senator and Delta Central from the Senate is extremely provocative, considering that Mr. Senate President said that it is a “sanction” against our Senator Omo-Agege for:

a. associating with about 60 other serving senators as a frontline member and the Secretary of the Parliamentary Support Group (PSG) for President Muhammadu Buhari;

b. expressing a dissenting opinion on a contentious amendment to Section 25 of the Electoral Act, 2010 regarding election sequence to the extent that, “There is a perception out there that the amendment is targeted at Mr. President (Buhari)” – a perception repeatedly confirmed by many authoritative sources; and

“Indeed, under the constitution and law, a senator can only vacate his seat if he dies; resigns; is recalled; decamps from the party on whose platform he was elected (without a division in that party); or he is otherwise removed by an appropriate court.

“The Senate has no constitutional powers to suspend or nullify a Senator’s election to represent his people. This is the main legal point already settled in rem in the cases of: Ali Ndume v Senate (i.e. also against the 8th Senate where Senator Saraki is Senate President); Bauchi State House of Assembly v. Hon. Danna; Usman v. Kaduna State House of Assembly; and Hon. Melaye v. House of Representatives.”

“Given that the judgment in the Ndume case is against this 8th Senate that you lead and the 8th Senate did not appeal against it, it stands to reason that you are fully aware of the current state of the law. But somehow, this 8th Senate appears to thrive in extra-constitutional, extra-judicial, unlawful and tyrannical exercise of power and impunity. This must explain your declaration that the PSG must be disbanded before Senator Omo-Agege can return to the Senate! In other words, to you, for Senator Omo-Agege to represent his people, his constitutional rights of association (in PSG), to hold opinions and to seek legal redress must first be extinguished! This is very dangerous for the Rule of Law and our democracy.”

The constituents said they would not allow Mr Saraki to expel their senator from representing them.

They requested Mr Saraki to ‘honourably and urgently allow our Senator Ovie Omo-Agege to continue to represent us and our people without any hindrance whatsoever; and if this option fails and we continue to be unrepresented;

“That we shall resort to self or collective representation by coming physically in our numbers to represent ourselves in the Senate, as our removal, without any constitutional basis, from decision-making in the Senate is a very clear existential threat to us in the Nigerian Nation.”