David Shulkin out, Ronny Jackson in as VA secretary

David Shulkin out, Ronny Jackson in as VA secretary

President Donald Trump announced Wednesday he will replace his Veterans Affairs Secretary David Shulkin with Ronny Jackson, who currently serves as physician to the President.

Trump thanked Shulkin via Twitter for his “service to our country and to our GREAT VETERANS” and said Robert Wilkie, the under secretary of defense for personnel and readiness, will serve as acting secretary until Jackson is confirmed.
A White House official said the embattled Shulkin was no longer effective in his role, saying his “distractions were getting in the way of carrying out the President’s agenda.”
RELATED: Who is Dr. Ronny Jackson?
Shulkin is the second member of Trump’s Cabinet to be ousted this month, following Secretary of State Rex Tillerson. A handful of senior White House officials have also resigned or been fired over the last two months, fueling chaos and uncertainty inside the West Wing.
Jackson, who is an active duty Navy physician, was nominated last week for a military promotion by the President. He was appointed as physician to the president by President Barack Obama in 2013, after having served on the White House medical team since 2006. He continued in that role after Trump came into office and quickly developed a bond with the President.
“He’s like central casting — like a Hollywood star,” Trump told donors during a fundraiser at Mar-a-Lago last month, according to audio of his remarks obtained by CNN.
Jackson took on an unusually public role for a presidential physician earlier this year when he took to the White House briefing room to field questions about Trump’s health, just days after questions about Trump’s mental fitness for office were raised. 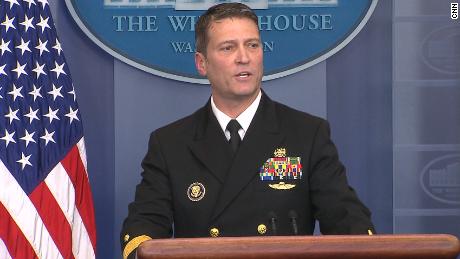 Shulkin’s departure from the administration is a stark reversal of fortunes for the VA leader, who served as undersecretary of health in the Obama administration. He’d been held in high regard by Trump, who publicly praised him and touted a series of legislative wins regarding veterans issues.
Trump even joked last year that his signature phrase, “you’re fired” would never be used with Shulkin.
Cabinet wives swept up in secretaries’ woes
“We’ll never have to use those words on our David. We will never use those words on you. That’s for sure,” Trump said of Shulkin last June.
Things soured early this year as Shulkin was the subject of a damning report from the department’s inspector general that found “serious derelictions” by Shulkin and senior VA officials on a Europe trip last year, and concluded that Shulkin had spent a good deal of the trip sightseeing and had inappropriately accepted a gift of Wimbledon tickets.
The report fueled Shulkin’s critics, both within his own agency and outside it, and brought into the open the power struggle over how to best care for the nation’s veterans. Expanding private health care for veterans was a talking point of Trump’s on the campaign trail, and a White House priority, and Shulkin’s critics have said he was a roadblock to achieving that goal.
As the year went on, Shulkin grew increasingly isolated and at odds with top aides, including those in charge of VA communications efforts, was so wide that the secretary had recently been conducting his own crisis communications effort via his personal cell phone, telling reporters that there were political staffers working to oust him.
Shulkin’s public comments rubbed White House officials, including chief of staff John Kelly, the wrong way. That frustration reached the White House recently, with Trump reportedly floating the idea in private of replacing Shulkin with Energy Secretary Rick Perry.
Investigation launched into how Shulkin staffer got top VA hospital job
His efforts to turn around the troubled VA were met with acclaim last year. However, over the last few months his standing with the White House grew more dubious, with political appointees saying that he wasn’t going far enough to advance the Trump administration’s goal of moving more care into the private sector.
The inspector general’s report also damaged Shulkin’s standing, though he remained widely popular on Capitol Hill and retained the support of many of the nation’s major veterans organizations.
The leaders of some of those groups publicly implored Trump to keep Shulkin on board at VA, saying they were concerned a potential replacement could be inexperienced or in favor of privatizing health care for the nation’s veterans.
Share
Facebook
Twitter
WhatsApp
Pinterest
Linkedin
ReddIt
Email
Print
Tumblr
Telegram
Mix
VK
Digg
LINE
Viber
Naver
Previous articleCarabobo fire: 68 dead in Venezuela police station cells
Next articleSyria war: France offers to mediate between Turkey and Kurds