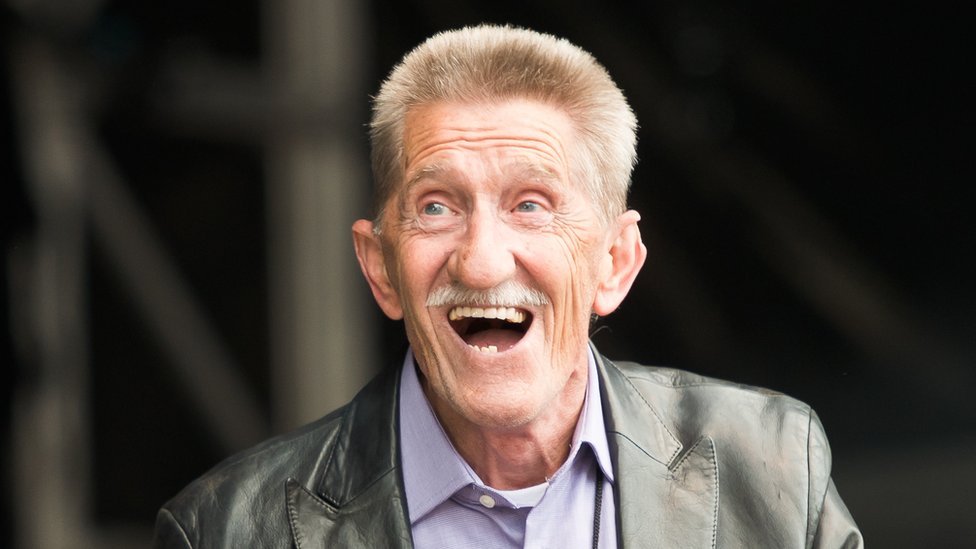 Barry Chuckle, one half of the comedy duo the Chuckle Brothers, has died aged 73 after a short period of ill health.

The entertainer, whose real name was Barry Elliott, starred in ChuckleVision with his brother Paul on the BBC between 1987 and 2009.

Paul said: “I’ve not just lost my brother, I’ve lost my theatrical partner of many, many years and my very best friend.”

Fans have paid tribute on Twitter, with many thanking him “for the laughs”.

Earlier this year, the brothers returned to the small screen with a new show, Chuckle Time, on Channel 5.

The star had been unwell towards the end of the new show’s filming.

Summer work was cancelled while Barry rested at his doctor’s request, but not long after his health deteriorated.

Manager Phil Dale said that the filming of their latest show had recalled the “wonderful days” of ChuckleVision.

He said: “It is with great sadness that the family announce that Barry passed away peacefully at his home surrounded by his wife Ann and all his family.

“The family would like to express their thanks to the many people who have been fans of the Chuckle Brothers and they know that they will share in part the great, great loss they feel.”

Mr Dale said Barry “leaves 50 years of laughter as his legacy, which is something very special”.

She said: “Barry would be so happy to know how much he was loved.”

Paul has asked me to send a message to thank EVERYONE for your lovely messages this morning, he is absolutely devastated so unable to respond himself but your messages really do help and he knows Barry would so happy to know how much he was loved, Sue X

The duo – who performed for friends and family in their backyard before becoming famous – started their careers as The Chuckles on ITV talent show Opportunity Knocks in 1967.

Emma Bullimore from the TV Times said the Chuckle Brothers were “pure silliness and joy” and a “staple part of so many childhoods”.

“They had such a twinkle in their eye,” she said. “They seemed to really enjoy what they were doing and that came to the screen. Everyone felt really happy watching them.”

Many viewers who grew up watching ChuckleVision – which ran for 292 episodes – expressed sadness on social media.

David Walliams, who performed with the Chuckle Brothers in a 2013 Comic Relief sketch, said they were “dazzling talents” who were the “last link” to British music hall tradition.

Farewell Barry Chuckle. I always thought he & his brothers were really special performers, not just because of their dazzling talents but also because they are the last link to the British Musical Hall tradition that gave us Stan Laurel & Charlie Chaplin. https://t.co/2jcCCP0HVH

Comedian and actor Jack Whitehall said he had been “obsessed” with the Chuckle brothers when he was younger.

Really sad about the passing of Barry Chuckle, as you may know i was obsessed with the Chuckle Brothers as a kid. Legends. Rest in peace.

CBeebies presenter Chris Jarvis said Barry was hilarious on and off stage – but also “the kindest of gentlemen”.

So sad to hear the news about Barry Elliott (Chuckle). Our heart felt condolences go out to Paul and to the rest of his family. A genuine old school entertainer who simply loved performing. Thanks for the laughs.

Rapper Tinchy Stryder, who recorded a charity single with the brothers, also paid tribute to the “funny, down to earth, super cool, talented, humble legend”.

“A true Variety great,” wrote comedian and presenter Les Dennis, who appeared on ITV’s New Faces in the same year as The Chuckles, as they were then known.

Paddy McGuinness, star of Phoenix Nights and Take Me Out, called Barry “one of my favourites from my childhood years, teenage years and as an adult!”

“Another piece of our childhood gone”, tweeted broadcaster Tony Shepherd, while one woman said: “RIP Barry Chuckle. As a kid I absolutely loved getting in from school and watching #Chucklevision.”

Rotherham United said the comedian was a “friend” as well as a fan and life president of the club.

Everyone at #rufc are deeply saddened this morning to learn of the passing of our life president, supporter and friend Barry ‘Chuckle’ Elliott, aged 73.

Our thoughts are with Barry’s family and friends, including his brother Paul, at this sad time. #OnceAMillerAlwaysAMiller

Bafta, which gave the Chuckle Brothers a special award in 2008, tweeted: “We’re deeply saddened to learn of the death of Barry Elliot, known as Barry Chuckle.”

And the BBC, which aired ChuckleVision, said Barry will be “treasured as one of the iconic children’s entertainers of a generation”.

Alice Webb, the director of BBC Children’s, said: “Off air, Barry was a gentleman and consummate professional, respected by all who worked with him, he will be sorely missed.”

Ah Barry Chuckle has died. If you’re in your 30s and you don’t move furniture around the house with your partner saying “to me, to you” you’re doing life wrong.

Senior British prosecutor Nazir Afzal said “a part of both mine and my children’s childhood passes on”, while politicians including Labour’s Angela Rayner shared tributes.

Comedian Arron Crascall tweeted that he had met Barry and shouted out the first half of the Chuckle Brothers catchphrase “to me, to you” only to hear the retort, “Shut up!”

Gutted about Barry Chuckle…
I once pointed at him in Oxford Circus and shouted “To Me” he pointed back and said “Shut up”
LEGEND!!!! And fantastic childhood memories!!!!