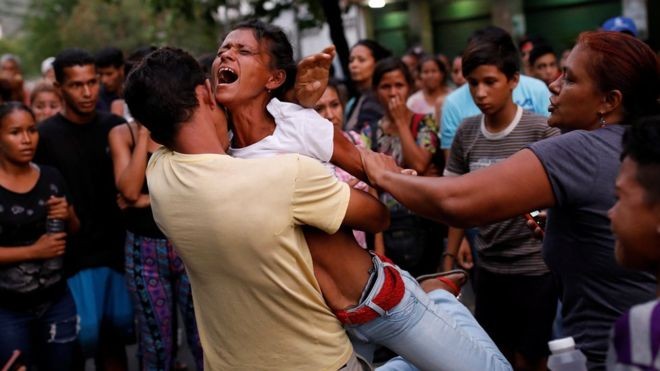 Rioting and a fire at a police station in the the Venezuelan city of Valencia, in Carabobo State, have left 68 people dead, government officials say.

Chief State Prosecutor Tarek Saab said an investigation into what had happened would begin immediately.

The blaze reportedly started after prisoners set fire to mattresses in an attempt to break out on Wednesday.

Police used tear gas to disperse relatives who surrounded the station after news of the fire broke.

State official Jesus Santander confirmed a police officer had been shot in the aftermath of the blaze, which has been brought under control.

He said the state of Carabobo was in mourning after the incident.

Relatives of the prisoners said many detainees had died because of smoke inhalation.

Some women and children who were visiting inmates are thought to be among the dead.

Venezuela’s prisons are notoriously overcrowded, with violence and deadly riots are common.

The country has struggled to accommodate its prisoners amidst an ongoing economic crisis, leading to convicts being held at temporary facilities such as the one in Valencia.

Carlos Nieto, head of the association Una Ventana a la Libertad (A Window on Freedom), says some police facilities are overfilled at five times their capacity.

Last month inmates at a different prison in Carabobo took a number of prisoners and guards hostage in another riot.