Canadians’ COVID-19 fears are rising again — and the U.S. might be to blame 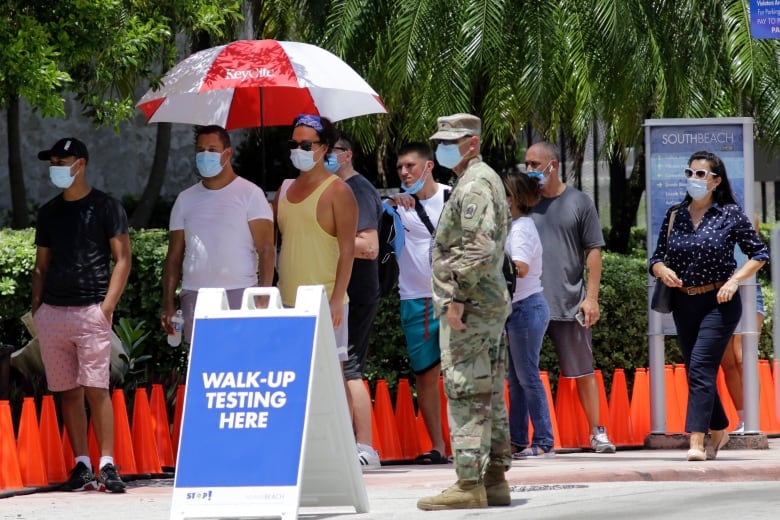 As the number of new cases of COVID-19 being reported daily in Canada has declined over time, Canadians’ concerns about the spread of the disease have spiked.

The uncontrolled outbreak south of the border might be the reason why.

Since June 7, the daily tally of new cases in Canada has been 500 or less. It’s been well under 400 per day for over a week. Just over a month ago, however, health officials were reporting between 1,000 and 2,000 newly confirmed cases of COVID-19 in this country almost every day.

The drop in cases doesn’t mean that Canada is out of the woods just yet — localized outbreaks are still popping up and hundreds of new cases are being reported daily. But the country is in a much better place than it was just a few months ago.

Nevertheless, Canadians are feeling more worried today, according to a recent poll.

The survey, conducted by Léger for the Association for Canadian Studies between July 3 and 5, found that 58 per cent of respondents were personally afraid of contracting COVID-19. That figure has increased seven percentage points in two weeks and is now the highest it has been in Léger’s weekly polling since mid-April.

It’s a notable shift in public opinion. Concern peaked in early April, when 64 per cent of Canadians reported being personally afraid of getting sick. At the time, Canada was reporting over 1,200 new cases every day.

From that peak, fears consistently decreased over the seven weeks that followed before falling to a low of 51 per cent. Concerns hovered around that level, with little variation from week to week, between late May and late June.

The epidemiology in Canada can’t explain this step backwards in public opinion over the last two weeks. On May 25, 1,011 new cases were reported in Canada. June 8 saw only 429 newly confirmed cases. Between July 3 and 5, when Léger was in the field, Canada was averaging 294 new cases per day.

So what explains this sudden flare-up in coronavirus fear?

Fear of an open border

While Canada’s COVID-19 trend line has been improving, the outbreak in the United States is getting worse.

At the low point in Léger’s polling on Canadians’ fears of contracting the disease, there were about 20,000 new cases being reported every day in the United States — fewer than during the peak point for Canadians’ COVID anxiety, when American health officials were reporting between 25,000 and 35,000 new cases daily.

But over the three days when Léger was last in the field, the U.S. hit new records for COVID-19, peaking at 57,000 new cases on July 3 alone. The caseload in most states is now rising.

It’s clear that Canadians are watching the cautionary tale south of the border. Searches on Google Trends for “COVID” and “U.S.A.” peaked at the end of March in Canada, but had dropped off to less than half of that by the first week of June. Since then, however, web searches related to the pandemic in America have nearly doubled, while searches related to the pandemic in Canada have held steady.

Polls suggest Canadians are worried about the situation in the U.S. A Nanos Research survey for the Globe and Mail found that 81 per cent of Canadians polled want the border with the United States to stay closed for the “foreseeable future.”

Renewed pessimism about the future

These darkening views on the pandemic can’t be tied entirely to COVID-19’s spread in the United States. The U.S. isn’t the only country with an uncontrolled outbreak. Both Brazil and India are reporting over 20,000 new cases per day and countries as far apart as Russia, Mexico, Pakistan and South Africa are also detecting thousands of new cases on a daily basis.

But the rising caseloads in the U.S. and elsewhere offer stark warnings about what could happen here if things go wrong. The periodic flare-ups on this side of the border also act as a reminder that the disease hasn’t gone anywhere. Even Prince Edward Island, which went months without a new case, has experienced a recent uptick.

Canadians are reporting more pessimism about the future, despite the apparently improving situation here. According to the Léger poll, 82 per cent of Canadians expect a second wave — that’s up six points from early June.

Just eight per cent of respondents want to see governments accelerate the pace of relaxing physical distancing and self-isolation measures, down five points since last month. The number who want to slow down the pace has increased by seven points to 28 per cent. The other 65 per cent want to maintain the current pace of re-opening.

The poll suggests Canadians have lost some of their late-spring optimism. The number who reported thinking that the worst is behind us peaked at 42 per cent in mid-June. That has dropped by seven points to 35 per cent, while the number who think the worst is yet to come has increased nine points to 39 per cent — its highest level since the middle of April, when the first wave of the novel coronavirus was cresting in Canada.

The weather has improved, the patios are open and people can get a haircut again, so things have gotten brighter. But more and more Canadians appear to be coming to the realization that this is likely to be just a temporary reprieve — and not the new normal.