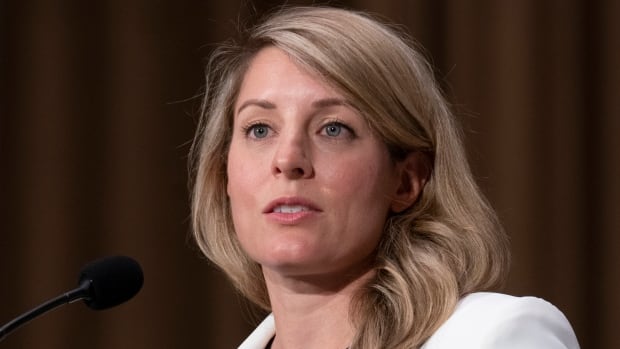 Canadian Foreign Affairs Minister Mélanie Joly is cancelling part of her trip to Europe amid ongoing tensions in Ukraine.

Joly recently finished a meeting of G7 foreign ministers in Munich, where they discuss the Russian military build-up around Ukraine. She is now returning to Canada instead of continuing on to Paris

“I have made the decision to postpone my trip to France and to immediately fly back home to Canada,” Joly wrote on Twitter on Sunday.

“We will be relentless in our pursuit of a diplomatic solution. There is still time for Russia to choose the path of de-escalation and dialogue.”

Due to rising tensions in Ukraine, I have made the decision to postpone my trip to France and to immediately fly back home to Canada. <br><br>We will be relentless in our pursuit of a diplomatic solution. There is still time for Russia to choose the path of de-escalation and dialogue.

A senior federal government source told Radio-Canada that the end of the Beijing Olympics brings an increased risk of Russian aggression since a symbolic truce period is usually observed during the Olympics.

G7 foreign ministers said they are concerned by the increase in violations of the Minsk agreements of 2014 and 2015, which were drafted with the intention of ending the fighting in the Donbas region of Ukraine.

“We condemn the use of heavy weaponry and indiscriminate shelling of civilian areas, which constitute a clear violation of the Minsk agreements,” the ministers said in a joint statement released on Saturday.

“Russia’s unprovoked and unjustified massing of military forces, the largest deployment on the European continent since the end of the Cold War is a challenge to global security and the international order.”

Later on Sunday, the Canadian government issued an advisory urging citizens to avoid non-essential travel to Belarus “due to the risk of arbitrary enforcement of local laws and the risk of armed conflict with Ukraine.”