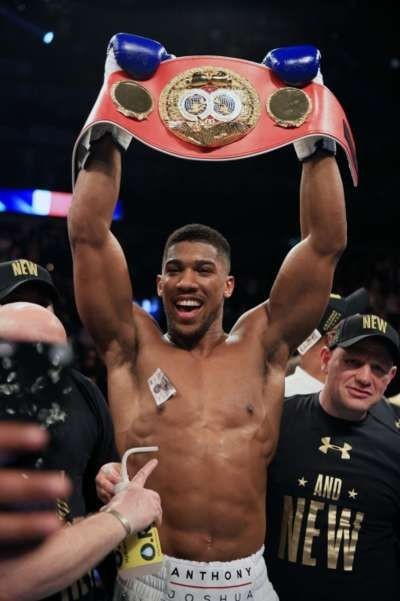 World Boxing heavyweight champion, Anthony Joshua, is set to visit Nigeria on a three-day tour in August, during which he would pay courtesy calls on Acting President Yemi Osinbajo in Abuja; and the governors of Lagos and Ogun states.

He would also visit some royal fathers, including the Ooni of Ife, the Awujale of Ijebuland and the Oba of Lagos.

The organiser of the tour and Director of Peel Aston Global, Khomeini Bukhari, explained that the boxing champion would attend a charity boxing match, Inspire Nigeria, 2017 at the Eko Hotel and the Transcorp Hilton Hotel, Abuja where he would take questions from the audience.

Bukhari in an emailed statement on Wednesday stated that arrangements had been concluded for the boxing champion’s homecoming.

He explained that the Inspire Nigeria, 2017 is a platform for Joshua to encourage Nigerian youths that their dreams and aspirations are achievable and that there is hope for them.

He said, “This event is part of his (Joshua’s) social corporate responsibility and duty to give back to Nigeria where he is the son of the soil.

“Part of the tour will be to visit the Presidency, some state governors as well as pay his respects to the royal fathers.

“I have secured the endorsement and support of several notable people in Nigeria and am very positive that this event will be by far the biggest event in Nigeria in a very long time.”

The businessman stated that Joshua had really made Nigeria proud, describing him as a true role model, hope for the youths, and a fine example of a good sportsman.

“We are working very hard on his trip as he is the best sports personality right now as far as I am concerned and thus deserves the best homecoming reception,” he added.

On reports that Joshua’s next fight may hold in Nigeria, Bukhari said it was up to the boxer’s promoter, Eddie Hearn to make the decision.