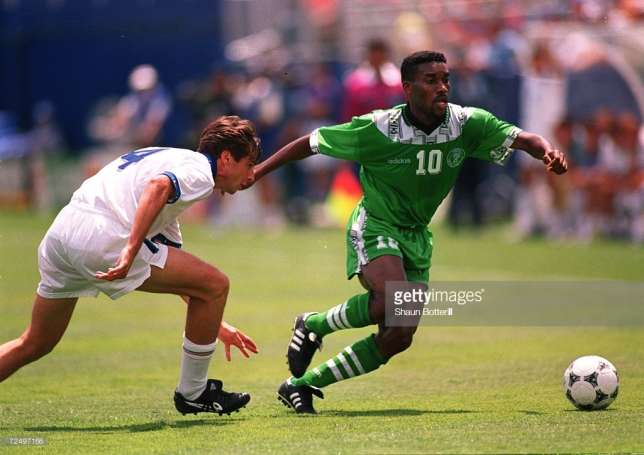 Okocha’s 15 dribbles against Italy at the 1994 FIFA World Cup is the most by any player in 52 years.

Super Eagles great Austin ‘Jay Jay’ Okocha has the most dribbles of a FIFA World Cup game in 52 years it has been revealed.

Okocha during his career was famed for his outrageous dribbling skills and was regarded as one of the most talented players of his generation.

In a 1994 FIFA World Cup game in the United States, Okocha made 15 dribbles against Italy for Nigeria.

Those 15 dribbles remain the most by any player at a FIFA World Cup game since 1966.

“Since 1966, the most dribbles completed in a World Cup match is 15, by Jay Jay Okocha for Nigeria against Italy in July 1994,” sports facts and stats website Opta Sports tweeted on their verified Twitter handle Optajoe.

Okocha was however on the losing side in that second round game as 10-man Italy came from behind to win 2-1.

Despite the sending off of Gianfranco Zola, Roberto Baggio scored two goals after Emmanuel Amuneke had given the Eagles a first-half lead.

Okocha at the FIFA World Cup

He played three games at the 1994 FIFA World Cup, making two substitute appearances and one start.

At the 1998 FIFA World Cup in France, the midfielder made three starts, two in the group stage and one in the round of 16.

As captain of the Super Eagles, he was on from start to finish in Nigeria’s three games of the 2002 FIFA World Cup in Korea/Japan.