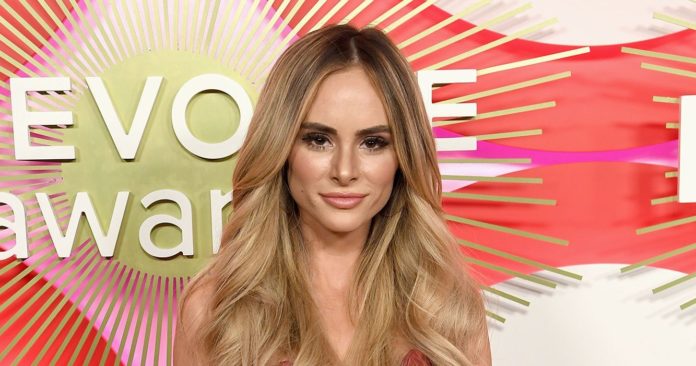 Amanda Stanton was showered with support from fans after revealing that she had been blackmailed — but one Twitter troll had no sympathy for the Bachelor in Paradise alum.

“@amandastanton if you feel violated why the hell did you make topless pics. Aim your anger at the dude or girl that took the pics,” the hater tweeted on Wednesday, April 3, one day after 28-year-old told fans that someone hacked her doctor’s database and was spreading images of her taken before her breast augmentation. “No mercy whatsoever for you. Go back to Nordstrom for more clothes.”

The Lani the Label designer kept her cool while responding to the critic, simply explaining, “They were medical photos that my doctor took…..”

Stanton shared an uplifting message on her Instagram Story shortly after, telling fans that she is “feeling much better” after opening up about being harassed. “Trying to stay off my phone as much as possible for the day and just be present,” she wrote. “One thing that’s really helping me is just counting my blessings … Life isn’t always smooth sailing but I have SO MUCH to be thankful for.”

The Bachelor alum previously broke down in tears on her Instagram Story on Tuesday, April 2, after opening up about her situation. “About three weeks ago, when we first moved into our new place, I woke up randomly in the middle of the night and looked at my email and I had about four emails from a random person who I didn’t know who said he hacked my doctor’s database from when I had my breast augmentation and that he had some nude photos of me in the doctor’s office, which is stupid, because they’re medical photos,” she explained. “But he was basically asking for a lot of money and threatening to send the photos to everybody that I follow. … He sent them to my friend’s boyfriend, he sent them to people who I work with, he sent them to producers at ABC. And it was just kind of out of my control and there was nothing I could do about it, so I figured that I might as well address it.”

Stanton’s rep later told Us Weekly that she has the “support of her family and loved ones, including boyfriend Bobby Jacobs,” and she “wishes to deal with this matter privately moving forward due to the vicious nature of the individual responsible for her harassment.”

Although Jacobs, 33, has been by Stanton’s side, the couple sparked split rumors on Tuesday after unfollowing each other on Instagram. However, a source later confirmed to Us that the lovebirds, who started dating in May 2018, are still together.

Stanton caught up with Us in March and revealed that the basketball player is The One for her and he is “like a father figure” to her daughters, Kinsley, 7, and Charlie, 5, whom she shares with ex-husband Nick Buonfiglio.