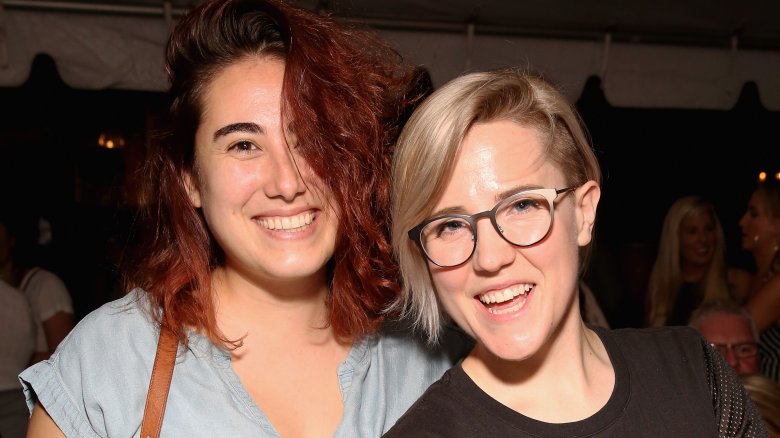 My Drunk Kitchen‘s Hannah Hart is ready to tie the knot!

On Friday, July 27, 2018, the YouTube star took to Instagram to announce that she and her longtime girlfriend, BuzzFeed producer Ella Mielniczenko, are engaged.

“#enGAYged ?I proposed! She said yes!” Hart wrote to her 1.3 million followers, captioning a number of sweet snapshots of the two showing off Mielniczenko’s gorgeous engagement ring. “There were many wonderful and hilarious details involved and we will share them all, but right now I just really needed to tell you guys and didn’t want to wait anymore. We will do a whole video about it and tell the whole story. But right now is just to share the exciting news!!! We are gonna get married, babyyyy!!”

A short video shared in the same post showed Hart asking her new fiancée how she’s feeling. “I’m just so happy and just shocked,” Mielniczenko, who also documented the romantic moment on social media, said. “I can’t believe it. I love you so much.”

Hart, 31, and Mielniczenko, 27, have been romantically linked since November 2016. During an exclusive interview with People, the Buffering: Unshared Tales of a Life Fully Loaded author revealed that she’d popped the question in Hawaii. She also announced that the newly engaged pair plan to get hitched sometime in 2020.

“If you asked, like, fifth grade Hannah, ‘What is your biggest dream?’ she would say it’s to have a family,” Hart told fans in a new video on her popular YouTube channel, titled “Everything Changes,” having joked that she “totally crushed” the proposal. “As I accepted my sexuality and realized how, I don’t know, little out-there queerness there is in the world, I got really scared that I was just never gonna have the chance to meet my somebody for my life.”

While confessing that change has always scared her, Hart, who scored her TV series, I Hart Food, on Food Network in 2017, noted that it’s simply “proof of life.” She went on to gush, “We are two engaged people … and it’s wild.”

Hart and Mielniczenko certainly aren’t the only celebrity couple to take this big step in their relationship in recent weeks. In June 2018, Ariana Grande’s whirlwind romance with fiancé Pete Davidson of Saturday Night Live began dominating headlines when the two got engaged after only a few weeks of dating. Similarly, Justin Bieber and model Hailey Baldwin confirmed their own quick engagement earlier this month, shortly after reconciling their on-and-off romance in June.

Meanwhile, Nick Jonas has reportedly proposed to Priyanka Chopra after getting together only two months ago. As Nicki Swift previously reported, the “Jealous” singer apparently popped the question on the Quantico actress’ 36th birthday in mid-July while the two were in London. At the time of this writing, neither party has publicly commented on the recent reports. However, according to a source cited by People magazine, “They are so happy.”

Congratulations to the happy couple on their engagement!