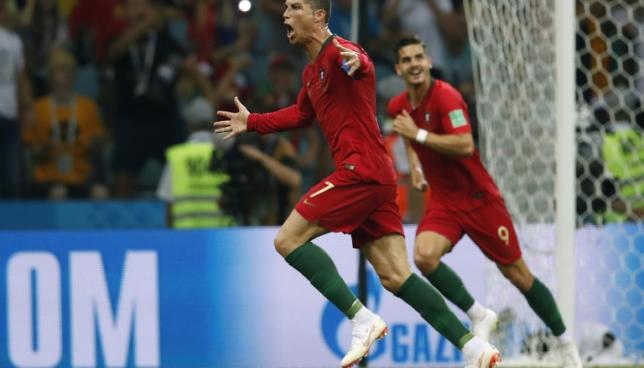 “The night was about Cristiano. He is relentless in his pursuit of greatness. What he is doing on the world stage is ridiculous.”

Match of the Day pundit Rio Ferdinand said he “couldn’t breathe” as former Manchester United team-mate Cristiano Ronaldo scored a hat-trick, including an 88th-minute equaliser, as Portugal drew 3-3 with Spain in a classic World Cup encounter.

Ronaldo, as he so often does, had the last word in a match full of drama, as Spain came within minutes of securing a happy ending to a turbulent week in which they sacked their manager a day before the start of the tournament.

So just how good was this Ronaldo display? Well, his was the star turn in a match that is sure to be remembered for years to come.

“I’m going to get a flight back tomorrow because I won’t see a better game,” joked former England winger Chris Waddle.

What did Ronaldo do?

It took just over three minutes for Portugal’s captain to make his mark on the game in Sochi, drawing Nacho into a foul in the area and converting the penalty with trademark cool.

Costa scored again to make it 2-2 before Nacho made amends with a sublime strike to put Spain 3-2 up.

But then came that free-kick…

Standing over the ball as De Gea set his wall and with just two minutes remaining, there was no doubt it would be Ronaldo who would take the set piece. And yet history suggested a team-mate – any team-mate – might have been better placed..

This, remarkably, was Ronaldo’s first goal from a direct free-kick in 45 attempts at major championships.

“One or two will ask why I said at half-time Ronaldo needs to work on free-kicks. Well it’s because it took him 45 attempts, but he did it,” said former England captain Alan Shearer.

“It’s a brilliant free-kick and it is technically so difficult to do,” added former England midfielder Danny Murphy. “He went over and around the wall and it had all sorts of bend and dip on it.”

Speaking on Russia Today, Manchester United manager Jose Mourinho offered a reminder that Ronaldo’s free-kick record has worsened since his days at Old Trafford and early years at Real, but added that “this one was the critical one”.

Over to you, Lionel…

Lionel Messi is another of those ones. Ronaldo’s pursuit of greatness has been inextricably linked with that of the Argentina forward, who starts his campaign against Iceland on Saturday.

“A little sub-plot to it is now the pressure is mounted on Messi’s shoulders after watching Cristiano here,” said Ferdinand.

“He’ll deliver,” came the reply from Cesc Fabregas on Match of the Day. Fabregas, of course, played with Messi at Barcelona between 2011 and 2014.

Former Scotland winger Pat Nevin said Ronaldo would have “hated” the discussions before the tournament about whether this will be Messi’s World Cup.

“Cristiano has raised the bar so Iceland could be in trouble,” he added.

Level with Puskas – greatness in numbers

This was Ronaldo’s 51st hat-trick for club and country, a “personal best” according to the man himself.

It comprised his 82nd, 83rd and 84th international goals, putting him joint-second on the all-time list alongside Hungary legend Ferenc Puskas, now trailing only Iran’s Ali Daei on 109.

Will he surpass that mark? Or is it a case of when?

Ronaldo also became the first man in history to score in eight consecutive major tournaments with his early penalty against Spain. Where will that streak end?

“Cristiano is the best in the world and I hope in Qatar once again he is going to score in a World Cup,” said Portugal coach Fernando Santos, feeling his side’s 33-year-old talisman can extend his international career until 2022.

Despite the brilliance of his performance, Ronaldo was quick to try to make his team the focus at the full-time whistle.

“The most important thing is to highlight what the team has done,” said Ronaldo. “The game was about to end and we managed to equalise so we are happy.

“We are not the favourites so we will try to do our best. The team is doing very well and we are going to do well for sure.”

Portugal’s next Group B game is against Morocco on Wednesday at 13:00 BST, while Spain face Iran at 19:00, no doubt happy to see the back of Ronaldo, for now at least.

“When you are playing a player like Ronaldo these things can happen,” said Spain coach Fernando Hierro.

“It is extremely fortunate for whichever team has him, but I certainly would not change him for any of the players in my squad.”

Where does it rank?

Ronaldo’s hat-trick is likely to become one of the most memorable World Cup moments and this match one of the best in the competition’s history.

“It was one of the best World Cup games I’ve seen – especially in a group stage. It augurs well for the rest of the World Cup,” said Match of the Day presenter Gary Lineker.

But where does Ronaldo’s performance rank? Here are some of the best individual displays in World Cup history…

Oleg Salenko – Russia 6-1 Cameroon (USA 1994) – Salenko remains the first and only player to score five goals in a single World Cup game. It was enough for him to earn a share of the Golden Boot, even though Russia went out in the first round.

Sandor Kocsis – Hungary 8-3 West Germany (Switzerland 1954) – Kocsis followed a hat-trick against South Korea with four in Hungary’s group-stage demolition of West Germany. The great Hungarian side seemed destined to be world champions, only to be stunned by the Germans in the final.

Zinedine Zidane – France 3-0 Brazil (France 1998) – Zidane bossed the 1998 final, taking France to the world title on home soil. He scored twice and dismantled a Brazil team rocked by the loss of their talisman, Ronaldo.

Eusebio – Portugal 5-3 North Korea (England 1966) – North Korea were heading for perhaps the biggest shock of all time when they led Portugal 3-0. Enter Eusebio, who scored four unanswered goals, including two from the spot.

Geoff Hurst – England 4-2 West Germany (England 1996) – To this day still the only hat-trick in a World Cup final, one that carried England to the greatest day in their footballing history and earned Hurst a knighthood.