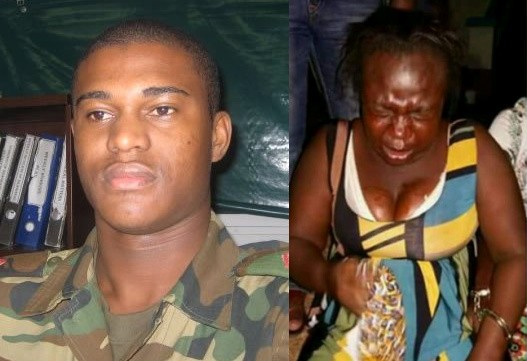 Akosua Takyiwaa, the woman who raised the false alarm that led to the lynching of Captain Maxwell Mahama has been arrested, myjoyonline.com states.

Takyiwaa is said to have raised the false alarm by calling the assembly leader for the community who then mobilized people who allegedly killed the soldier.

The late Captain Mahama was reported to have stopped to buy snails, and when he took money from his pocket to pay for the snails, the trader saw the pistol and reportedly informed the assemblyman of the community that the young military officer was an armed robber.

This was made known two weeks ago at a joint press conference by the Ghana Armed Forces and Ghana Police at the Police Headquarters in Accra.

According to the police, without verifying the identity of Captain Mahama, the assemblyman and armed townsfolks accosted the military officer, gave him a chase, shot at him, and eventually pounced on him using cement blocks, clubs, among others, until he died around 10am on Monday, two hours after he had started the jogging.

The late Mahama is reported to have met his untimely death when he was out for his early morning jogging. He was lynched by some youths after he was mistaken for an armed robber. He was pelted with stones and burnt to death.