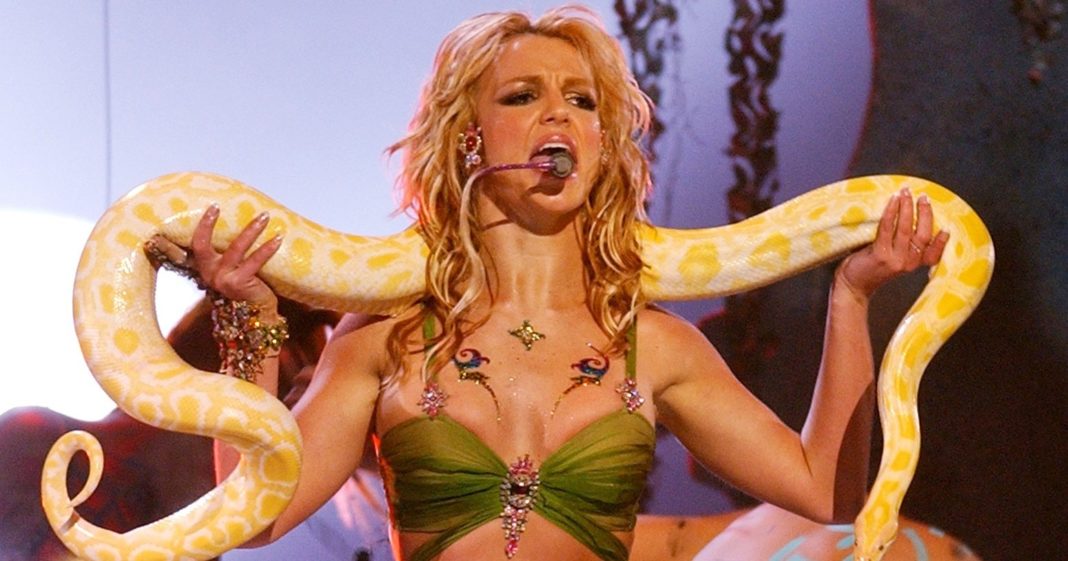 Still a “slave” to the rhythm! Britney Spears threw it back to her iconic 2001 MTV Video Music Awards performance on Instagram on Monday, June 3.

Spears, 37, uploaded a video of herself dancing around her house to Billie Eilish’s single “Bad Guy,” complete with a stuffed snake toy draped over her shoulders. “Great song !! It made me pick up another ? @billieeilish,” she captioned the post.

In the comments section, Eilish, 17, simply wrote, “Omg,” while Spears’ boyfriend, Sam Asghari, joked, “The snake must be so dizzy after this ? #goat.” Singer Noah Cyrus commented, “Get it queen,” and Jersey Shore star Nicole “Snooki” Polizzi wrote, “Omg YAS.”

The Princess of Pop famously danced with a live albino Burmese python named Banana while performing her hit “I’m a Slave 4 U” at the MTV awards ceremony in September 2001. Eleven years later, Spears gave her Twitter followers an update on Banana, writing, “I heard she’s alive and well. … This makes me smile.”

The Grammy winner has been active on Instagram since completing a 30-day stay at a mental health facility in April. Since then, she has shared multiple workout videos, photos with Asghari, 25, and even clapped back at trolls who accused her of not posting her own content.

Spears has also set aside time for family after seeking treatment, most recently attending her eldest son Preston’s eighth grade graduation on Wednesday, May 29. A source told Us Weekly exclusively that the 13-year-old graduated from the same private Christian school in Los Angeles County that his 12-year-old brother, Jayden, attends. The “Womanizer” singer’s ex-husband Kevin Federline, to whom she was married from 2004 to 2007, was also at their son’s moving-up ceremony.