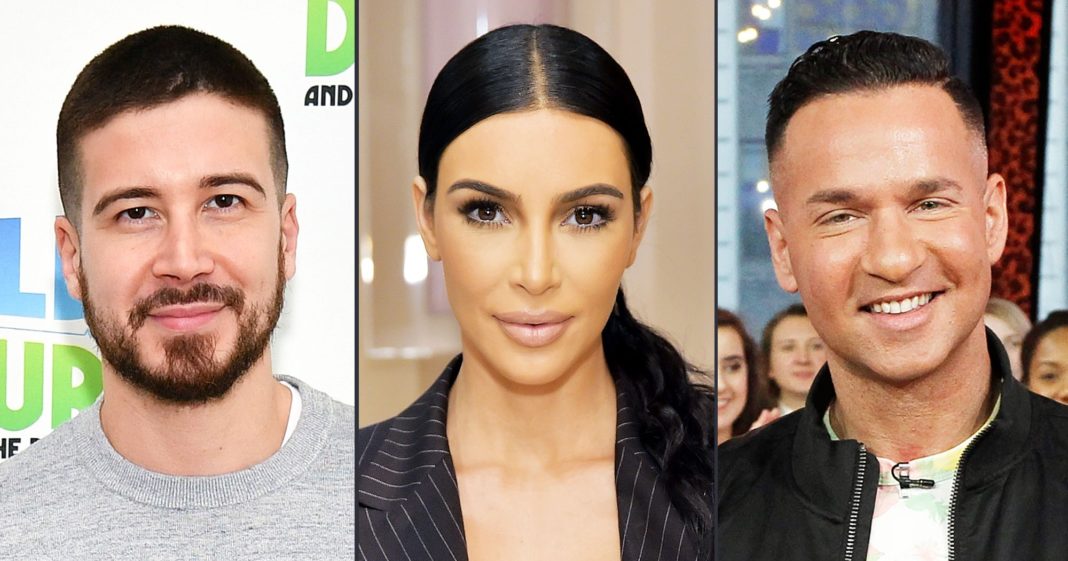 Doing whatever he can. Jersey Shore Family Vacation’s Vinny Guadagnino asked Kim Kardashian for help in getting his MTV costar and longtime friend Mike “The Situation” Sorrentino out of prison.

Guadagnino, 31, was alerted that the Keeping Up With the Kardashians star, 38, “has been getting prisoners out of jail” and pleaded for her to take on Sorrentino’s case.

“Mike is an amazing person. To me, he’s completely reformed. He’s, like, a great member of society,” the Control the Crazy author told TMZ on Tuesday, January 22. “He preaches to kids who have addictions. He’s a big advocate and evangelist for recovery. He’d be better off out here helping people.”

The Vinny & Ma Eat America alum concluded his message by addressing the KKW Beauty founder directly: “Kim, get on that.”

Guadagnino also gave an update on how the Here’s the Situation author — who was sentenced to eight months for tax evasion — is doing behind bars. “I heard he’s doing great in there, which is amazing,” the Staten Island native explained. “Like, I knew he was gonna do good and he, um, was never, like, really nervous about it. So I was praying. I’m like, ‘Oh, God, I hope once he’s in there it’s OK.”

He continued: “He’s gonna be all right. He’s so strong, mentally, from, like, his [drug addiction] recovery process that it’s working out for him now in jail. … Mike’s the type of guy now that, like, looks for the positive in every situation.”

The former political aide, who recently lost 50 pounds thanks to the ketogenic diet and calls himself “the keto guido,” also said that he is Sorrentino’s “health coach” and joked, “I’m glad that he’s gonna be working out a little bit more in there.”

Sorrentino turned himself into federal prison on January 15, nearly a year after he pleaded guilty to one count of tax evasion. According to the Federal Bureau of Prisons website, he will be released from the Otisville Federal Correctional Institution in upstate New York on September 13. He will also be on supervised release for two years and has to complete 500 hours of community service as a part of his sentencing.

Kardashian, meanwhile, has advocated for inmates such as Alice Marie Johnson and Cyntoia Brown over the past year and helped facilitate their clemency and releases from prison. The Selfish author has subsequently been flooded with emails from people asking her to help them overturn their convictions as well.