Vincent Kompany: Where does he rank among Premier League leaders? 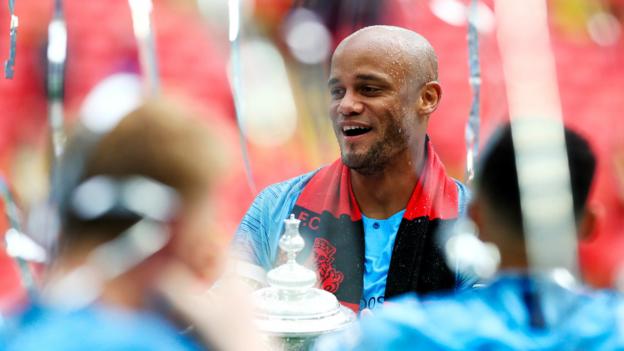 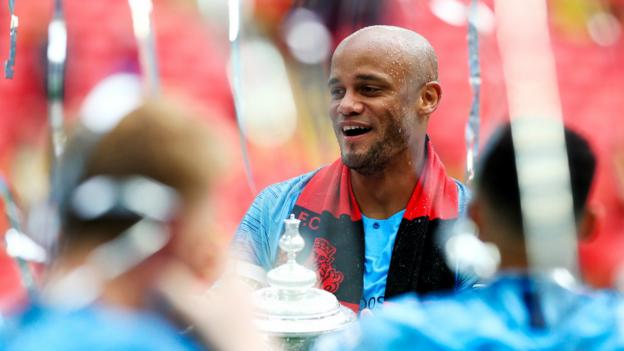 Manchester City chairman Khaldoon Al Mubarak described Vincent Kompany as “the lifeblood, the soul and the beating heart” of the club’s silver-lined era after the iconic captain announced his departure to become Anderlecht’s player-manager.

The 33-year-old is leaving Etihad Stadium on a high after the 6-0 FA Cup final win over Watford secured Manchester City a domestic clean sweep in addition to the Premier League title and League Cup.

Kompany will be remembered as one of the greatest and most enduring figures of the Premier League era after winning four titles, four League Cups and two FA Cups since joining City from Hamburg in August 2008.

He can also take his place among the great leaders of the Premier League era, a statesmanlike and inspirational figure off the pitch and the man coach Pep Guardiola still turned to in the closing days of his City career.

When City could not afford to blink in the title race with Liverpool, when they effectively needed a 14-game winning sequence to see off Jurgen Klopp’s side, Guardiola put Kompany at the heart of his defence and relied on his experience, quality and know-how to guide them over the winning line.

And so it proved, especially when he provided one of the great City moments with his unlikely – and, not to be too unkind, uncharacteristic – 25-yard thunderbolt that flew high past Kasper Schmeichel to give them the 1-0 win against Leicester City that set the platform for a glorious finale at Brighton.

Kompany was no stranger to those decisive moments in unfamiliar territory, scoring the vital winner against Manchester United in April 2012 that allowed City to take control of the title race with two games left, then scoring the second goal that provided the cushion against West Ham when victory was required to see off Liverpool once more on the final day of the 2013-14 season.

The Belgian, however, means so much more.

Kompany straddled City’s great transition from the early days of the Abu Dhabi revolution, signed by Mark Hughes then subsequently a trusted general on the field and off for Roberto Mancini, Manuel Pellegrini and latterly Guardiola.

No matter how much the scenery changed, Kompany was a constant, consistent presence.

He has also been a spokesman for wider issues, such as racism, and all the proceeds from his testimonial in September will be donated to Manchester’s homeless, an individual who recognises his influence and voice can stretch beyond football, who sees the bigger picture and context away from the game.

He is guaranteed his place in City’s hall of fame and, indeed, the Premier League’s.

It was fitting and deserved that his last act at the club was to lift the FA Cup, a triumph which wrote a new chapter in the history books as City equalled the biggest FA Cup final win – which stretched back to Bury’s 6-0 win over Derby County in 1903 – on what, with this season’s other successes taken into account, was arguably the greatest day in the club’s history.

Kompany will, without question, rank among the best Premier League captains and leaders, but who are the others who will vie for that accolade?

Tony Adams’ stature at Arsenal is embodied in the bronze statue outside Emirates Stadium, arms outstretched replicating the pose he struck after scoring in the 4-0 win against Everton at Highbury that helped clinch the Premier League in 1997-98.

Adams was part of the famous Arsenal defence assembled by George Graham alongside the likes of Lee Dixon, Steve Bould, Martin Keown and Nigel Winterburn, with goalkeeper David Seaman, that Arsene Wenger retained as the cornerstone of his successes.

Adams was leader by instruction and example after being named Arsenal captain at just 21 in January 1988. He was a towering presence from making his debut in November 1983 until his retirement at the end of the 2001-02 season.

He overcame well-publicised personal problems with alcohol to become the first Englishman to life the coveted league and FA Cup double in 1998 and is the only player to have captained a title-winning team in three different decades in the 1980s, 1990s and 2000s.

When the story of Arsenal is told, Adams’ leadership will be a key chapter in a career in which he won the former First Division twice, the Premier League twice, the FA Cup three times, the League Cup twice and the European Cup Winners’ Cup in 1994.

The key to Steven Gerrard’s greatness as a captain was his ability to drag Liverpool teams that could not be ranked among their greatest to glorious success.

The prime example was the famous Champions League win over AC Milan in Istanbul in 2005, when his header started Liverpool on the road to one of the most remarkable comebacks in sporting history after Milan led 3-0 at half-time.

And the 2006 FA Cup final will always have Gerrard’s name attached for the spectacular right-foot equaliser from 35 yards with Liverpool trailing 3-2 to West Ham and with the background soundtrack of the stadium announcer in Cardiff flagging up four minutes of stoppage time. It was his second goal of the game.

In a time of flux – and sometimes trauma – at Liverpool, Gerrard was the local boy who always gave the fans hope great days can be rekindled.

And he delivered – they won the FA Cup twice, the League Cup three times, the Uefa Cup and that Champions League.

Gerrard, with a quiet and often introspective personality that belied his on-field presence, led by example, not with the clenched fist or verbally.

The Premier League title escaped, most painfully when he slipped to concede a goal against Chelsea when Liverpool lost out to Manchester City in 2014 – but Gerrard’s deeds as a winner and leader in an era of uncertainty at Anfield make him one of the greatest players, and captains, the club have had.

Roy Keane was thrust into the role of Manchester United captain following the sudden retirement of Eric Cantona in 1997 – but fitted the template of a leader required by manager Sir Alex Ferguson to the letter.

Keane was feared and respected; reputations did not matter on or off the field. In so many ways he was His Master’s Voice once the game started, effectively Ferguson on the field, rallying, rollocking and delivering the performances that left his stature as a world-class midfielder unquestioned.

He was captain in United’s treble-winning season in 1998-99, with arguably his finest performance for the club mixing the glory of inspiring a 3-2 win from 2-0 down against Juventus in the Champions League semi-final second leg in Turin, scoring the first goal, before picking up a yellow card that ruled him out of the final against Bayern Munich in Barcelona.

Keane’s remarkably philosophical reaction, more concerned that the job was done rather than expressing his own personal disappointment, only confirmed this was a personality – for all its combustible and outspoken quirks – who was the ultimate team man.

He would challenge anyone – team-mates as well as opponents – taking liberties with United, most famously when he confronted another great midfielder and leader of the era Patrick Vieira in the tunnel at Highbury before the 4-2 win over Arsenal in February 2005 after believing he had been antagonising his colleagues.

Keane confronting Vieira, pointing to the pitch before saying “I’ll see you out there” was a window into his confrontational, fiercely competitive character.

The Irishman’s refusal to take a backward step often led to conflict, including his departure not long after an explosive interview criticising United’s younger players was pulled from the club’s official MUTV channel.

Keane, however, remains one of the great captains, a player and personality who embodied United’s glories, winning seven titles and four FA Cups.

Alan Shearer may not have won trophies at Newcastle but his decision to ignore the advances of all-conquering Manchester United to fulfil the dream of playing for his hometown club when he left Blackburn Rovers for £15m in 1996 cemented his place in the affections of all Geordies.

Shearer inherited the famous Newcastle number nine shirt worn by Jackie Milburn and Malcolm ‘Supermac’ Macdonald and performed with such quality, longevity and brilliance that he can comfortably take his place alongside any of the strikers of his generation.

As Newcastle’s captain, he literally led from the front.

He scored 206 goals in 404 appearances for Newcastle and is still the Premier League’s record goalscorer with 260 goals in 441 games.

He lived the dream of playing for his beloved club at St James’ Park, and every supporter who watched him in action on Tyneside will be grateful for the privilege.

The banner draped for so many years along the Matthew Harding Stand at Stamford Bridge was testimony to how John Terry was regarded at Chelsea.

Terry was a divisive figure outside Stamford Bridge as he claimed and lost the England captaincy amid controversies, was banned for four matches and fined £220,000 in 2012 for racially abusing QPR’s Anton Ferdinand, and was often regarded as wielding too much power in an influential dressing room – charges he always vehemently denied.

There was no such debate among Chelsea’s fans, who saw Terry as the playing embodiment of the club’s successes under Jose Mourinho, Guus Hiddink, Carlo Ancelotti, Roberto di Matteo and Antonio Conte.

Terry was Chelsea’s lion-hearted talisman as, like Kompany at Manchester City, he was part of the transition of a club changed by a mega-rich owner, in this case the Russian Roman Abramovich.

He made his Chelsea debut in October 1998 and went on to become Chelsea’s most successful captain after being handed the role by Mourinho in 2004, winning five Premier League titles, four FA Cups and three League Cups.

Like Keane, the Champions League was a bitter-sweet affair for Terry, from the tears of Moscow in 2008 when he slipped and missed the spot-kick that would have claimed the trophy eventually won on penalties by Manchester United, to his red card for kneeing Barcelona’s Alexis Sanchez that ruled them out of Chelsea’s win in the 2012 final against Bayern Munich. He also missed the 2013 Europa League final win over Benfica in Amsterdam through injury.

Terry, though, is one of the most influential leaders of the modern era and the words of the banner still ring true around Stamford Bridge.

Patrick Vieira inherited the Arsenal captaincy from Tony Adams in 2002, a natural succession given his contribution to previous successes under Arsene Wenger, his world-class ability and a forceful personality that engendered complete respect from opponents and team-mates alike.

His place as an iconic leader is assured as Vieira was captain of ‘The Invincibles’ – the Arsenal side that went unbeaten through a 38-game Premier League season to win the title in 2003-04.

Vieira was a member of a magnificent club of midfielders, leaders and captains along with Gerrard and Keane and is a legendary figure at Arsenal after winning the league and FA Cup double twice in a tally of three titles and three FA Cups – also winning the latter at Manchester City in 2011.

As captain, he may be in the shadow of Adams, but Vieira more than made his mark in his comparatively brief time wearing the armband.

All pictures via Getty Images.