US A29 counter-insurgency aircraft coming in 2020 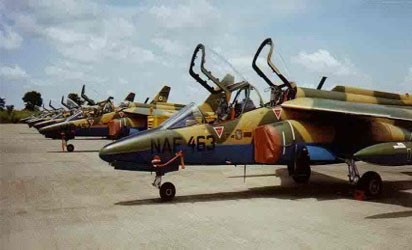 US A29 counter-insurgency aircraft coming in 2020
US wants dialogue between FG and IPOB The 12 A29 Super Tucano aircraft ordered by Nigeria from the United States to fight insurgency are not due to arrive until 2020, a senior United States administration official disclosed at the weekend. Speaking ahead of President Muhammadu Buhari’s visit to the White House next Monday, the official said the high regard the Donald Trump administration accords Nigeria is underscored by the fact that Buhari would be the first African leader to be received in the Trump White House. The US administration official who spoke to journalists on the basis of strict anonymity nevertheless affirmed that issues arising from past agreements between the two countries would be on the cards at the US – Nigeria summit, including the open declaration of assets. The administration official also spoke on the United States’ commitment to free and fair elections in 2019, teasingly asserted that the country’s candidate for the presidential election would be Mr. Democratic Process. The official also said Washington would encourage open and frank negotiations between the Federal Government and the Indigenous People Of Biafra, IPOB. Affirming that all issues involving the sale of the Super A29 Tucano aircraft have been cleared including receipt of an estimated $593 million from Nigeria, the official, however, said the aircraft were being built in Florida and would take at least two years to manufacture. “The planes have not been fully built, and we are looking at delivery at or about 2020 as you don’t just pick them up because they have to be manufactured according to specifications.” The A29 Super Tucano is a light attack aircraft intended for counter-insurgency, close air support, and aerial reconnaissance missions in low-threat environments. The estimated $539 million Nigeria paid for the aircraft the official disclosed included the cost of training for pilots, engineers, and spare parts. The official observed that President Buhari’s visit to the White House was reflective of the premium the U.S gives to Nigeria noting that the Nigerian leader is the first African leader to be received by President Trump in the White House. He said the warmth in relations was reflective in last week’s summit of African land forces co-hosted by the U.S. and Nigeria armies. The US administration official restated the superpower’s commitment to the tenets of the U.S. – Nigeria Bi-national Commission, one of which is the open declaration of assets by elected officials and their subordinates. “Sometimes it is difficult to implement (declaration of assets), but we will encourage that it should be followed through,” the official who briefed selected journalists said. Given the declaration of the Boko Haram as a terrorist group by the United States’ States Department, the official was tasked on what approaches the US would take on issues between the Nigeria government and IPOB. “On IPOB, we see that there is an aggrieved population that would want to have its views heard and we will encourage that there should be dialogue. “We always encourage dialogue as we did with NDA (Niger Delta Avengers), PANDEF. We didn’t tell the vice-president to visit the Niger Delta, but we were happy that he did it and it worked, we are not colonialists but facilitators.” The administration official, however, affirmed that issues pertaining to free and fair elections in 2019 would be seriously encouraged by the US administration and resounded in actions ahead of the polls. “We are committed to doing more and more for Nigeria even more than we did in 2015.” Teasing the journalists as the briefing came to a close, the official asked, “do you want to know who Washington would be supporting in 2019?” “Our candidate is the Democratic Process!” the official said in the background briefing ahead of the historic summit between President Trump and Buhari, the first African leader in Washington D.C. next weekend.
Share
Facebook
Twitter
WhatsApp
Pinterest
Linkedin
ReddIt
Email
Print
Tumblr
Telegram
Mix
VK
Digg
LINE
Viber
Naver
Previous articleFormer first lady Barbara Bush guarded by Secret Service after death, report says
Next article‘Tyrannical’ judge told ‘not to return’ after she berates defendant who died three days later