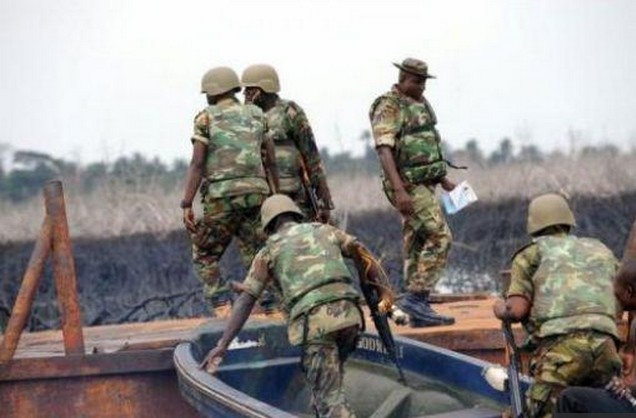 The Joint Task Force protecting oil facilities in the Niger Delta has killed two kidnappers in a multiple raid on kidnappers’ hideouts.

The task force also rescued one of the kidnapped victims.

Commander of the JTF, Rear Adm. Suleman Apochi, made the disclosure at a news conference in Yenagoa on Tuesday.

The commander spoke through his Chief of Staff, Col. Jibril Abdullahi.

He said that the vandals had disrupted oil production by sabotaging the Tebidaba-Ogboinbiri-Brass pipeline, operated by Italian oil major Agip.

Apochi noted that the success recorded by the joint military operation was traceable to the support given by Niger Delta residents.

“Our efforts in tackling the activities of pipeline vandals resulted in the arrest of suspected vandals that detonated dynamites, resulting to the breach of an oil facility located at Tebidaba-Ogboinbiri-Brass pipeline in Bayelsa State.

“Following the incident, troops acted on a tip-off, spotted the suspected hideout at a fishing camp along Isonogbene in Southern Ijaw, where three suspects were arrested for complicity in the vandalism.

“Similarly, troops deployed at Beneside location in Ekeremor LGA also apprehended two suspects alleged to have been responsible for the sabotage and theft of wellhead 6 actuator device, an oil wellhead tool.

“Their criminal action led to the disruption of the operations of the oil firm. The wellhead is currently under repairs.”

He explained that in another development, troops deployed at Omoku forest in Rivers, responding to a distress call, engaged suspected kidnappers in a gun duel, leading to the rescue of a kidnapped victim.

Apochi said the engagement led to the death of two of the suspected kidnappers, while the rescued victim was currently receiving treatment in a medical facility in Port Harcourt.

He said that troops also raided a suspected pirates’ hideout at Eleme in Rivers, where the suspects escaped but troops recovered several items, including weapons.

According to him, items recovered include 23 rounds of 7.62 mm Ball special ammunition, electricity generating set and a 40-horse power Suzuki speed boat. (NAN)