Wowplus
Home Communities Politics Tom Steyer who is worth an estimated $1.6 billion Drops Out Of 2020... 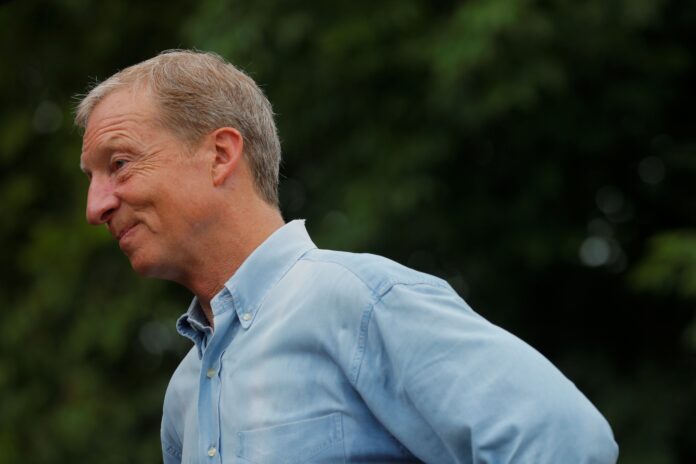 Tom Steyer who is worth an estimated $1.6 billion Drops Out Of 2020 Presidential Race, Tom Steyer, the billionaire hedge fund manager, and environmentalist, on Saturday, dropped his bid for the 2020 Democratic presidential nomination.

Steyer exited the race shortly after former Vice President Joe Biden secured a crucial win in the South Carolina primary, and days before Super Tuesday. MSNBC and CNN were first to report on Steyer’s plans.

Steyer told his supporters that he was suspending his campaign because he couldn’t see a “path to winning.”

“I got into this race because I thought that people weren’t adequately addressing racial injustice in this country, and it’s true. I thought that we were at risk as a country in terms of climate … and that’s true. And we live in a country that’s deeply unjust economically … and that’s really true,” he said in a speech Saturday night. “I was in this race to talk about things that I care the most about.”

Steyer, a 62-year-old philanthropist who has funneled millions of dollars into a campaign to impeach President Donald Trump, said any Democrat would be better than the current administration.

“Every Democrat is a million times better than Trump,” he said. “Lindsey Graham’s a disaster. He’s a disaster for the people here.”

Steyer launched his candidacy in July after initially saying he would not run. He joined an already crowded field of more than 20 Democratic candidates, vowing to take on a “rigged” political system in Washington, tackle the climate crisis, fight income inequality and powerful corporations, and expose Trump as “a fraud and a failure.”

“Really what we’re doing is trying to make democracy work by pushing power down to the people,” he said in a video announcing his campaign. “If this is a banana republic with a few very, very rich people and everybody else is living in misery, that’s a failure.”

Steyer, who is worth an estimated $1.6 billion, faced accusations that he purchased his way onto the debate stage. Despite spending more than $325,000 per day on advertising in the first six weeks of his campaign ― the New York native said early on that he would divvy out an astonishing $100 million, if necessary ― he came up short of qualifying for the Sept. 12 debate in Houston.

Undeterred, Steyer went on to qualify for the next four straight debates. In January, he swung back at the idea that it was his money that landed him a spot in that month’s debate, telling CNN he’s a “grassroots person.”

“I think that the thing that has put me on this stage — and it is the same for every single person who’s running for president — is the message,” Steyer said. “I have a very simple message, which is, the government is broken. It’s been bought by corporations.”

By then Steyer had already spent $106 million on advertising, Politico reported.

Some environmentalists and activists welcomed the addition of another strong voice for climate action, whereas others were bewildered by his decision to compete against Sen. Bernie Sanders (I-Vt.) and Washington Gov. Jay Inslee, who centered his campaign on tackling the climate crisis, as HuffPost’s Alex Kaufman reported.

On the campaign trail, Steyer repeatedly claimed he was the only candidate willing to say climate change is their No. 1 priority. In November, he vowed to use presidential emergency powers to address the crisis ― a move that legal and political experts told HuffPost could open dangerous doors and ultimately hinder long-term action.

Steyer founded the environmental advocacy group NextGen America in 2013 and spent years fighting to block the construction of the Keystone XL oil pipeline. He and his wife have pledged to give half of their fortune to charity and philanthropy.