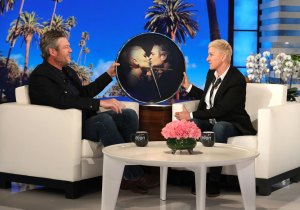 Putting the pressure on! After successfully nudging Alex Rodriguez and Jennifer Lopez to take the next step, Ellen DeGeneres is encouraging Blake Shelton to propose to Gwen Stefani with the same pre-engagement gift.

“So Jennifer Lopez was here and I wanted to help her out with A-Rod, because she wanted to marry him, obviously like Gwen wants to marry you,” the talk show host, 61, told the 42-year-old country music crooner on the Wednesday, May 1, episode of The Ellen DeGeneres Show. “And I gave her a clock that she could give to him, like the clock is ticking, time is passing. I gave her the clock, and literally a week later he proposed to her.” (The former baseball pro popped the question on March 9.)

DeGeneres then handed Shelton a similar giant clock with a photo of him and Stefani, 49, kissing. 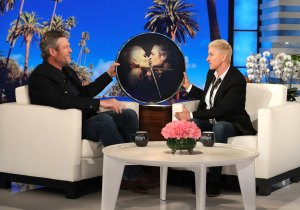 “So Mother’s Day is coming up, and I have something for you to give to her,” the comedian explained.

Shelton quipped back: “So you’re saying, there’s a chance she’s gonna ask me to marry her, with this clock?”

“I’ll call her tonight,” DeGeneres added. “I’ll tell her she’s waiting for you.”

The “Honey Bee” singer and the former No Doubt frontman started dating in 2015 following their respective divorces. While Shelton split from Miranda Lambert after four years of marriage in July 2015, Stefani and ex-husband Gavin Rossdale finalized their divorce in 2016. The exes share sons Kingston, 12, Zuma, 10, and Apollo, 5.

The blended family made their first red carpet appearance at the UglyDolls premiere on Saturday, April 27. Shelton and Stefani were all smiles as they made their way down the carpet in Los Angeles with her three boys.

“We went to the premiere of the movie, which was this last weekend, and that was actually my first scene, and Gwen turned to me and she goes, ‘Is that your cartoon voice?’” Shelton told DeGeneres about the outing to his movie premiere. “We brought all the kids and Gwen’s brother and his family — we made a whole day of out it. It was a lot of fun.”

Us broke the news in March that Shelton and Stefani want to tie the knot, but are waiting until her marriage to Rossdale is annulled by Catholic church officials “so she can marry Blake and have it be recognized by the church,” a source explained.

The source added: “Gwen’s religion has always been extremely important to her, and Blake is completely supportive of this.”