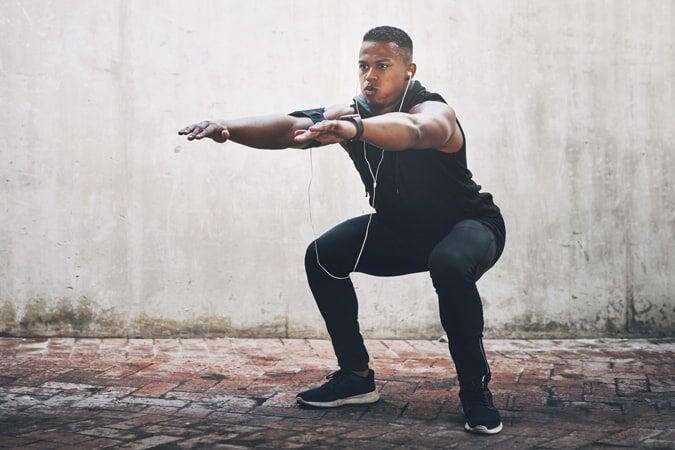 When it comes to shifting a few kilos and burning fat, it doesn’t take a rocket scientist to figure out that calories in versus calories out is key. In other words, you need to burn off more calories through exercise than you consume through eating and drinking. Sounds simple. Until you consider that the average guy needs to torch around 7700 calories to lose 1kg of fat, at which point it can seem like an uphill battle. Not if you’re smart, though. Understand broad nutritional rules and repeat the best exercises for losing weight, and you’ll find that shedding some fat doesn’t actually take that long. You don’t even need to obsess about calories, says Elliot Upton, elite personal trainer at Ultimate Performance Fitness. “Realistically, the majority of calorie counters are grossly inaccurate; the variances that can occur are huge,” he says. “They use outdated formulas which only really consider people’s age and weight. This is massively inaccurate because even between people of the same age and weight there can be huge variance, particularly in hormonal issues, gut issues, genetics, body fat percentage, and muscle mass.” If your aim is purely to lose weight, though, try making smarter food choices instead of counting every calorie. Ditch sugar, swap white potatoes for sweet potatoes, white bread for wholegrain and white pasta for brown. And stick to a consistent exercise routine alongside these dietary changes and you’ll lose weight surprisingly easily. With that in mind, we asked Upton to put together his PT-approved list of the best exercises to lose weight. Grab some Savlon because these will burn.

Weight lifting exercises are among the best for losing weight because they have the potential to build the maximum amount of muscle and have a greater EPOC effect. For the uninitiated, that’s ‘Excess Post-Exercise Oxygen Consumption’ – a ‘calorie afterburn’ which means the exercises put such a strain on your system that you’ll keep burning calories even after you’ve put the weights down. “According to the Compendium of Physical Activities, a standard 60-minute session of resistance training can burn up to 432 calories per hour for a 70kg male,” says Upton. “That said, it’s extremely difficult to suggest a calorie count for these exercises because there is so much variance person to person in things like total load lifted and time under tension of the muscle.”

Want to make sure that you’re torching the maximum calories, regardless? Upton says that “the heavier the load lifted, and the more muscle recruited, the higher the potential calorie burn would be.” Work the below into your workouts to see quick results.

Apologies to the leg-day shirkers out there, but when it comes to burning fat there’s nothing quite like the squat. “The squat involves almost every muscle in the body,” says Upton. “It works for big muscle groups and has a large range of motion through all the joints, meaning it taxes the cardiovascular system heavily. There’s no real place to rest, either, meaning the body is always working even when you’re stood with the bar there is still demand on the body.” Squat slowly, thinking about decelerating (not dropping) until you have reached the bottom position. This is the point you cannot lower your hips any further without your heels lifting off the floor and/or your lower back rounding – don’t go beyond this, or you’ll hurt your back. Estimated calories burned: 200 calories per 15 minute set

Another of the ‘big three’ movements (along with squats and bench press), the deadlift is the ultimate full-body power move. “Deadlifts are great for targeting the whole body and maximising the amount of calories burned,” Upton explains. “The legs are working hard, the back and abs needed to stabilise, your arms are working holding the bar.” Most people struggle with keeping their chest up and end up doing deadlifts with a rounded back. For beginners, the trap bar deadlift variation can be good because it is much easier to maintain the correct positions and avoid that rounding of the back. Estimated calories burned: 266 calories per 30 minute session (for an 89kg man, depending on barbell weight load)

For upper body workouts, nothing beats a proper pull-up. You may think it’s mainly an arms and back exercise, but with proper form, almost every muscle is roped in, upping your calorie burn exponentially. “Most people look like a scared cat when doing pull-ups, with rounded back and legs flailing and kicking around,” says Upton. “To do a proper pull-up requires a full range of motion and a slight retraction of the shoulder blades at the bottom with the arms straight. Not an easy task, but if you can master these, you will change your physique for the better in record time.” Imagine a string attached to your sternum pulling your chest up towards the ceiling. Between this and your legs hanging straight down, your back should have an arch. This lets you fully shorten the lats. It also avoids the chest collapsing forward and the shoulders internally rotating. Estimated calories burned: 60 calories per 15 minute set

Again, leg day flakes might not appreciate this one, but as your quads are the body’s largest muscles – and therefore it’s biggest calorie burners – it might be time to put your best foot forward. “Lunges work the largest muscle groups in the body – the glutes and quads,” explains Upton. “Lunges are a unilateral movement, so you’ll do 10 reps per leg, meaning the demand on the cardiovascular system, and your calorie-burn is increased.” Keep your knee in line with your front toe as you lower yourself down. Keep your weight on your heels as you straighten up to help maintain balance. Estimated calories burned: 275 calories per 30 minute workout (for a 68kg man)

“When it comes to maintaining weight loss long term, the exercises above will certainly help, just so long as you’re progressively overloading each exercise over time,” says Upton. In other words, you need to be constantly challenging the body with more reps, sets, weight, tempo, or more time under tension. Alongside resistance training, the below are also great long-term fat burners and are easy to build into your daily routine if you haven’t got the time or energy to hit the gym for a big weights session.

High-intensity interval training is a brutal scorcher switching between short bursts of extremely high-intensity activity, such as sprinting, with low-intensity periods of recovery, like walking. “HIIT is a great -for-your-buck method of cardio training,” says Upton. “It’s fast and time-efficient and can expend a significant amount of energy. Thirty minutes of HIIT will have a higher energy expenditure than 30 minutes of gentle jogging. “There are many benefits to this type of cardio including increasing your work capacity, increasing the lactate threshold, raising your metabolic rate and improving insulin sensitivity.” Estimated calories burned: 9-13 per minute

Confidently running through city streets like you’re Rocky is one of the greatest feelings in the world. And while steady-pace jogging doesn’t burn as many calories as the same amount of HIIT, running for weight loss has the added bonus of building a brilliant basis for fitness. “Something like a 5km run or jog can be a great way to increase your energy expenditure,” says Upton. “But if a body transformation is your goal it should be used sparingly because too much and it may cause joint issues and muscle breakdown over time.” Estimated calories burned: 290 calories per 30 minutes

The difference in energy expenditure between someone active all day and someone who is sedentary can run into hundreds and hundreds of calories. This can be the difference between you being in an energy deficit, where you will lose fat and an energy surplus where you will gain fat. So crack out the Fitbit and aim for 10,000 steps per day. “When it comes to fat loss, NEAT is massively overlooked and sometimes completely forgotten, yet it’s a powerful fat loss tool,” says Upton. “NEAT stands for ‘non-exercise activity thermogenesis’ and it is the total amount of calories you burn from non-exercise related activity, like walking for example. “You can make it more efficient by either walking at a faster pace, or alternatively factoring it into your day – such as walking the dog more frequently, taking work calls and meetings on foot, or using it as an opportunity to listen to a podcast.” Estimated calories burned: 314 walking at 3.5mph for one hour

The Best Of The Rest

Share
Facebook
Twitter
WhatsApp
Pinterest
Linkedin
ReddIt
Email
Print
Tumblr
Telegram
Mix
VK
Digg
LINE
Viber
Naver
Flip
Copy URL
Previous article
16 Of The Best Men’s Cargo Shorts That Deserve To Be Back In Your 2022 Wardrobe
Next article
The Best Luggage For Men: 15 Pieces That Will Change The Way You Travel in 2022

18 Best Dress Shoes For Men: Different Styles For Any Occasion 2022

117 Of The Best Pickup Lines: Our Greatest Smooth, Funny And Flirty Lines for 2022