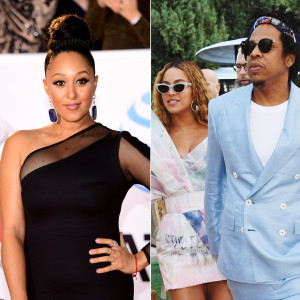 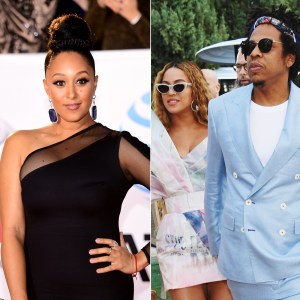 Have you ever seen the crowd goin’ apes–t? If you haven’t, all you have to do is mention the name Jay-Z and Beyoncé‘s fans will swarm! Tamera Mowry knows that all too well now.

Less than two weeks after the Real cohost, 40, mentioned an innocent interaction she once had with the “4:44” rapper, 49, she revealed her reaction to the backlash she received from the “All Night” songstress’ fandom (a.k.a. the Beyhive).

“I think in the beginning, I was aloof,” she exclusively told Us Weekly at the NAACP Image Awards on Saturday, March 30, at the Dolby Theatre in Hollywood. “I was like, ‘What’s going on?’”

The Sister, Sister alum continued, “I try not to look at that stuff. If it’s negative, I don’t like to make an agreement with it, and what I mean by that is making an agreement with my spirit, with my soul, because I’m a very positive person. I’m a mom. I’m a wife. So, I’m focusing on that. Yeah, I was just [like], ‘What the hell is going on?’”

On the March 20 episode of The Real, Mowry reminisced about feeling charmed by the Rocawear creator prior to his marriage to Beyoncé and before her marriage to Adam Housley.

Mowry told Us she was confused about the entire debacle. “What’s so funny is that I never thought it was going to be a big deal,” she said. “All I did was ask for gum and thought he was pretty cool. That’s it.”

The former child star then joked about what she’d do if she ran into the Roc Nation founder at the NAACP Awards. “If I see him tonight, I’ll ask him for more gum,” she laughed. “But I’ll ask Beyoncé for gum too. She’s with him now!”

“I actually met Jay-Z in person, and he wasn’t with Beyoncé at the time and I wasn’t dating anybody,” she recalled on her talk show. “And when I met him, you do get, like, hit with the charm.”

The Disney Channel alum proceeded to tell her story: “My sister and I were at a premiere of Nutty Professor and he walked by. And I was like, ‘Oh, my God, that’s Jay-Z!’ I was like, ‘Can I have some gum?’ And he gave me some gum.”

Shortly after, Queen Bey’s legion of fans flooded the comments section of one of Mowry’s selfies with Housley, 47, with bee emojis.

“You may need some bee repellent sis,” one Instagram user quipped. Another commented, “I’m just here to see if the BeyHive is attacking you.”