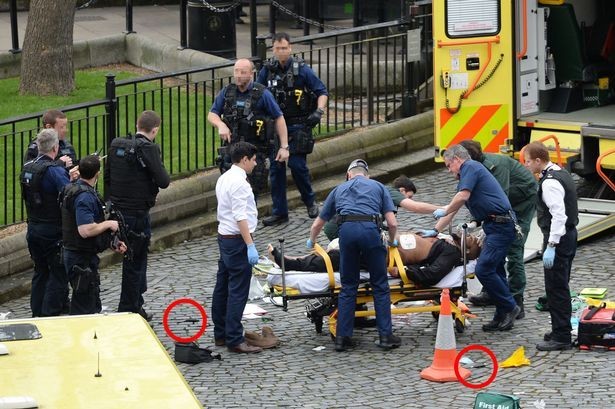 There is tension in Idumuje-Ugboko community, in the Aniocha Local Government Area of Delta State, after the palace of the traditional ruler, Nonso Nwoko, was attacked by some suspected hoodlums, who killed one man  and left scores injured.

PUNCH Metro learnt that some residents had fled the community due to the attack.

It was gathered that a town meeting was being held by some elders in the community when the hoodlums struck.

In the ensuing bedlam, property valued at millions of naira was allegedly destroyed, as houses and cars were vandalised.

It was alleged that policemen from the state command did nothing to stop the attack.

A member of the royal family said the meeting was to conclude the burial rites of the former traditional ruler of the community.

He said, “The late Obi died late February 2017, and the heir apparent, Nonso, was crowned.  The burial rites were just concluded.  We were supposed to have a town meeting to introduce his son. Very important decisions were also to be taken.

“The meeting was about to start when some youths in their hundreds invaded the palace. They beat up the elders, broke bottles and destroyed property. When the police arrived, the hoodlums didn’t leave. When the Deputy Commissioner of Police came to make peace, the attackers refused to leave and none of them was arrested. In the end, we had to get some soldiers to protect the new king.”

The witness, who did not want to be identified, said the incident later degenerated as some of the hoodlums returned to the palace with guns, adding that some youths guarding the palace repelled them.

He lamented that security agencies abandoned the palace and went to the house of Nonso’s cousin, Ned Nwoko.

The traditional ruler, Nonso, said the police in the state had not been fair to him, adding that Ned was behind the attack on the palace.

Nonso said his dispute with Ned started after he opposed the 90 hectares of land the latter demanded from the community.

He said, “My younger cousin, Ned, asked for 90 hectares of land from the community in 2015, which he said he wanted to use to build a sports university.

“I opposed the idea because about 10 years ago, he was given 33 hectares of land which he said he wanted to use for agriculture, but he diverted the land for another purpose.

“The late Obi, my father, also opposed it, but he took it personal with me. So, when the king died, he came up with some papers claiming that the late Obi approved the land before his death.

“He petitioned the police and they came to arrest us for the issue. After clearing us of the allegation of forging the late Obi’s signature, they said we mounted pressure on the late Obi to reject the proposal. Later, they accused me of killing my own father, a man who died naturally at an old age.

“They have accused me of different things, includingan allegation that I stole N4m rice from a shop in 2012, whereas I was in Lagos that time.

“The attack on the palace had the signature of Ned, and the police did nothing. Some of our elders were injured in the head. We were able to identify two of the policemen that were there and we wrote to the police command. Till date, nothing has been done to them.”

Nonso said he was served a fake court summon which originated from the state command headquarters, adding that when he showed up at the court to answer the summon, he was told nothing of such existed.

He said although the police promised to investigate the matter, nothing had been done till date.

Ned, a former member of the House of Representatives, however, refuted the allegations, saying the attack on the palace had nothing to do with land.

He said most of those injured during the fracas were his loyalists, who were attacked for supporting investigations into the late Obi’s death.

He said, “It was my supporters that were beaten up. The land in question was given to me through a committee set up by the town. I have the CofO and other documents. We have submitted our application to the National University Commission and we have paid all the fees and submitted necessary documents. But some of my cousins, led by Nonso, went to court to stop the university. This was about a year and half ago. There was never a crisis over the land.

“The issue is that Nonso and his thugs beat up those who gave me the land. About 15 to 20 people were injured late May when this incident happened. They destroyed their cars and motorcycles and set their houses ablaze.

“The crisis was caused by tussle for the kingship. The wife of the late king wrote a petition to the Inspector-General of Police, alleging foul play in the death of her husband.

“The IG directed investigation into the death. Nonso and others, who were suspected of foul play, became jittery and conveyed the town meeting to deal with those supporting the investigation and my university.

“On that day, the thugs stationed at the palace beat up the community prime minister, who they didn’t want to be part of the meeting. They also beat up the Odogwu and others who were supporting the university. They went to the house of the leader of the vigilance’s group, beat him up and took away some guns.”

He said six suspects had  been arrested by the police.

The secretary to the community’s land allocation committee, Kennedy Iloh, alleged that he was kidnapped and beaten by some hoodlums allegedly working for the traditional ruler.

He said after about three hours, he was freed.

A top community leader, Chief Chris Ogwu, said some elites in the community had started mediating in the crisis.

“Some of the community elites have started mediating. I am just returning from a peace meeting now,” he said.

A source, however, told PUNCH Metro that the dispute in the community was because Ned supported Nonso’s rival to the throne, Emeka.

He said, “The rule of the community is that the mother of whoever will be crowned must come from the community. There are two heirs to the throne –Nonso and Emeka.

“Immediately the king died, Nonso took over office. Ned and others who are being attacked now are victims because they supported Emeka. The state government has not given Nonso the staff of office and the traditional stool is still in contention.”

The state Police Public Relations Officer, Aniamaka Andrew, said the command was making efforts to reconcile the warring parties, adding that the community had been in turmoil following the incident.

He said, “We have employed more of peaceful overtures to ensure that the belligerence in the community is halted.

“The village has always been peaceful and for a dispute between two brothers to bring the community to a crisis is needless.

“All hands must be on deck to ensure that the two factions come together.

“We are not against Nonso, who is now a king. We need his traditional institution to help us in many ways.

“As a leader, he has a lot to lose or gain. He should know that certain people will make mistakes and he has the duty to bring everybody to his fold. His brother must also embrace peace.”