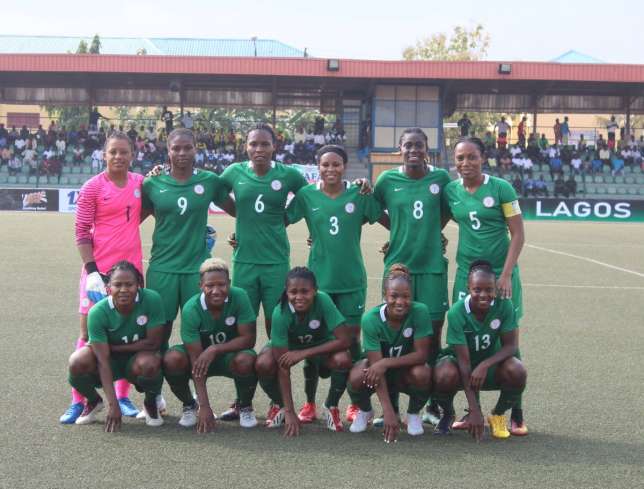 The Super Falcons are through to the 2018 AWCON after beating Gambia home and away.

The Super Falcons of Nigeria defeated their Gambian counterparts 6-0 on Monday, June 11 to qualify for the 2018 African Women’s Cup of Nations (AWCON).

The Super Falcons took an early lead when Ordega was brought down in the penalty box, Oparanozie stepped up and converted the resulting spot kick

play The Super Falcons aare through to the 2018 AFCON

Just before the halftime break African Women’s Player of the Year Oshoala doubles the lead for the Super Falcons as they went to the half time break with a two goal lead.

After the break Oshoala scored set up teammate Oparanozie to score her second of the game in the 49th minute.

Oparanozie scored her hatrick when put through on goal by Ngozi Okobi to score the fourth goal of the game, while Oshoala added fifth in the 74th minute.

The last goal of the game was scored by Oparanozie who completed her double brace in the 83rd minute.

The result means that Nigeria won both the home and away encounters after a 1-0 victory in Gambia to give a 6-0 win on aggregate.

The Super Falcon have therefore progressed to the 11th AWCON finals which will be held in Ghana later in 2018 which will produce the continents representatives at the 2019 FIFA Women’s World Cup.