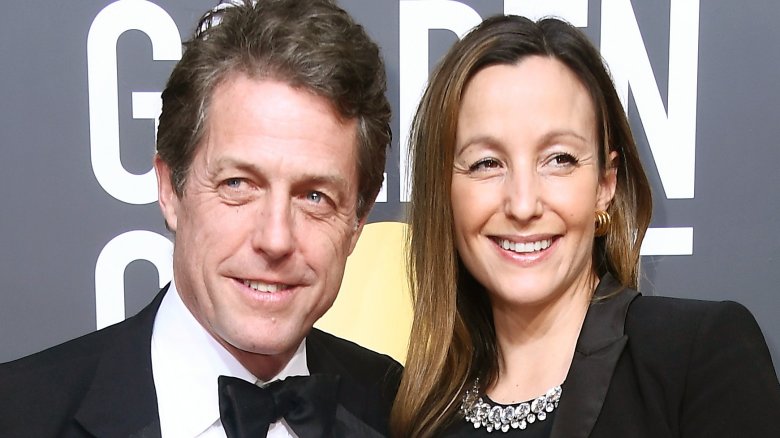 Hugh Grant is a married man!

On Friday, May 25, 2018, the Love Actually star tied the knot with his longtime girlfriend, Swedish television producer Anna Eberstein.

According to the Telegraph, the low-key ceremony took place at the Chelsea Registry Office in London, where Grant was spotted wearing a navy blue suit and tie while sporting a silver ring with three red gemstones. Meanwhile, Eberstein donned a blue blouse and white miniskirt, complete with a classic gold wedding band.

“Everybody looked very happy and relaxed, it was obviously an informal occasion with only very close family members present,” an eyewitness told the publication, adding that everyone was “full of smiles” while posing for photos afterward. “The group congregated on the steps and Grant stepped in right at the last minute, seemingly in a bid to attract attention.”

The wedding marks the Notting Hill star’s first marriage. Having been involved in a string of high-profile relationships, Grant was previously known as Britain’s most famous bachelor. In 2016, he told Howard Stern that he doesn’t believe “human beings are meant to be in 40-year-long monogamous, faithful relationships” (via Us Weekly). The Four Weddings and a Funeral star went on to say, “I think there’s something unromantic about marriage.”

However, he added, “I can see the lovely aspect if you marry exactly the right person — your best friend and it’s cozy and it’s lovely.”

Elizabeth Hurley revealed that Grant, 57, and Eberstein, 39, had welcomed their third child together in March 2018. “He had another one last week. He has five,” she said of her ex and old friend during an appearance on Watch What Happens Live with Andy Cohen. “He was over 50 when he spawned them all! He’s an enchanting dad — really, really sweet.”

The newlyweds, who have been romantically linked since 2012, are also proud parents to a 5-year-old son, John, and a 2-year-old daughter. Grant also shares two young children — a boy and a girl — with ex Tinglan Hong.