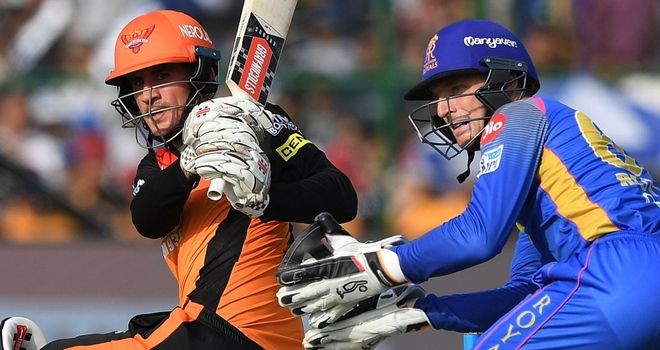 Sunrisers Hyderabad again had their bowlers to thank as they defended 151 to beat Rajasthan Royals by 11 runs.

Captain Kane Williamson top-scored for the Sunrisers, hitting 63 off 43 balls, while England batsman Alex Hales made 45 at the top of the order on his IPL debut but a late burst from Jofra Archer (3-26) restricted them to 151-7, a below-par total on a decent wicket.

However, their much-vaunted bowling attack put in another sterling performance, Siddarth Kaul taking 2-23, and despite Ajinkya Rahane’s unbeaten 65, Rajasthan came up short.

The win takes the Sunrisers above Chennai Super Kings to the top of the IPL table, six points clear of the Royals who remain just outside the play-off places.

Despite losing Shikhar Dhawan early, the Sunrisers made steady progress through Hales and Williamson in the first half of their innings.

April 30, 2018, rcher found Williamson’s edge in the fifth over, only for Rahul Tripathi to drop a regulation chance at slip.

Hales and Williamson eventually fell in consecutive overs as they tried to up the run-rate and from there the innings stuttered to a close.

In reply, Rajasthan looked to be cruising to victory as Rahane and Sanju Samson (40 off 30 balls) took them to 72-1 as they approached halfway.

Kaul removed Samson and when Yusuf Pathan (1-14) bowled Ben Stokes (0) in the next over, the Sunrisers seized control. Ben Stokes was bowled for a duck by Yusuf Pathan (Credit: AFP)

Jos Buttler holed out to Rashid Khan (1-31) and although Rahane batted through until the end, some typically tight Sunrisers bowling stifled Rajasthan and the visitors held on to win comfortably.