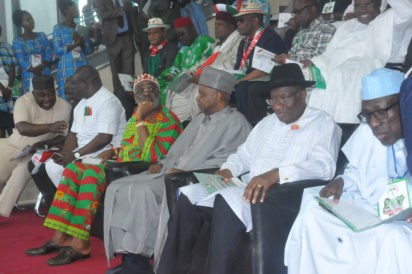 Prominent Northern leaders on Saturday refuted claims by some politicians in the country who are branding the All Progressives Congress (APC) government as clueless, commending the ruling party for providing the insight and leadership to achieve prosperity in Nigeria. The leaders also praised the ruling party for sanitizing the polity, reversing Nigeria’s economic decline and restoring law and order in the country.

“The APC government is not clueless. It is on course to creating an inclusive and broad based economy that offers opportunities and jobs to all our people” the leaders said.

The leaders who were in Abuja to take the temperature of Nigeria and to look back over the past 18 years said Nigeria can only be developed through sacrifice, hard work, dedication and commitment from its people at all levels.

The leaders in a communiqué issued after the meeting in Abuja commended the ruling party for lifting Nigerians out of destitution and presenting a clear policy to tackle the economic challenges in the country.

“APC remains focused and visionary. Nigeria is moving at multiple levels. There is a concentrated effort to purge corruption in the country” the leaders said.

The communiqué was read by the chairman of APC United Front, Alhaji Ibrahim Musa.

The leaders praised the ruling party for rescuing Nigeria from the excesses of democracy under the Peoples Democratic Party (PDP).

They described the 16 years of PDP government as a political earthquake in Nigeria’s history,

Specifically, the leaders emphasized how PDP turned the nation into economic mess.

The leaders also commended the National Chairman of APC, Chief Odigie-Oyegun for his vision, which is anchored on unity of purpose and the desire to work together in order to move Nigeria to an era of economic and political transformation.

“Chief John Odigie-Oyegun is selfless, disciplined and result oriented. He has become the standard by which political party chairmen are measured in and outside Africa. The APC national chairman is thinking outside the box and consolidating the ruling party”.

The leaders while urging members of the civil society, the press and others not to join critics of President Muhammadu Buhari and APC in damaging Nigeria’s name on the world stage said the disagreement among major political actors in some APC states would not affect the electoral fortune of the party.

“We are opposed to leadership that focuses on enriching itself. APC is giving effect to the will of the people and will continue in Gombe, Taraba, Kaduna, Kano, Kogi, Bauchi, Katsina, Benue and Jigawa. It will form the next government in Abia, Enugu, Ebonyi Delta, Bayelsa, Anambra, Ekiti and Osun”