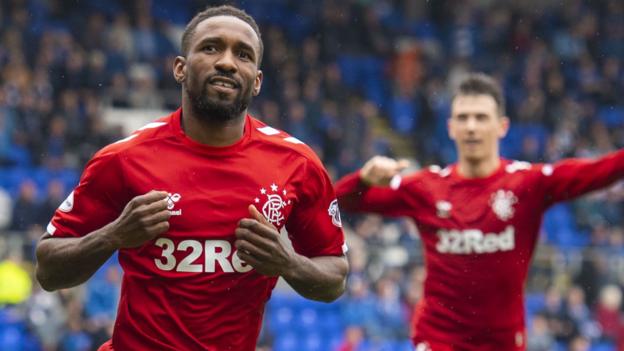 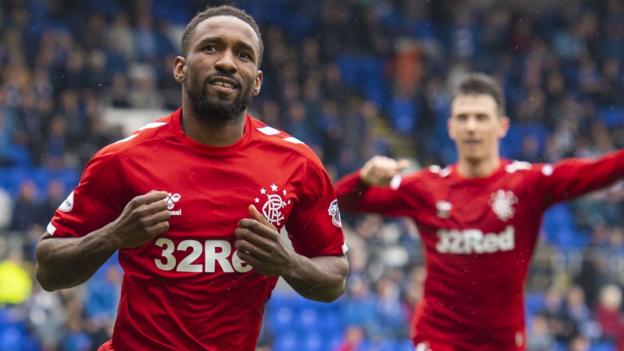 Alfredo Morelos put the visitors ahead just a minute after half-time, then Connor Goldson headed in on the hour.

Substitute Jermain Defoe added a controversial third on the counter-attack after St Johnstone claimed an attempt had crossed the line, before the veteran Englishman slid in his second a minute later to seal the win.

The victory kept Rangers three points adrift of their city rivals, who came from behind to beat Kilmarnock.

St Johnstone, however, are still without a league win this season and slipped to the bottom of the Scottish Premiership table after Hearts beat Hibernian later on Sunday.

“If we have any ambitions of having a good season, we have to come to places like this at times when everything is against us and still perform and take maximum points.”

Those were the words of Rangers manager Steven Gerrard ahead of the game at McDiarmid Park. No excuses, no slip-ups, just the three points. And those were probably the same words he uttered at half-time as his side clattered back into the dressing room after a frustrating first half.

Despite the short recovery time between their hard-fought win over Feyenoord at Ibrox on Thursday night and their journey up to Perth, Rangers were quick out the blocks.

They took four minutes to register their first shot, and had six within the opening 20 minutes – three from Morelos, two from the electric Sheyi Ojo, but nothing to really trouble Zander Clark in the home goal.

Ojo continued to threaten as the first half developed, with the Liverpool loanee repeatedly getting the better of Scott Tanser. And Joe Aribo, one of two changes from Thursday’s Europa League tie, was outstanding in the middle.

But Rangers’ bright opening went by without reward and seemed to fizzle out, and only a fantastic stop from Allan McGregor prevented the hosts from going into the break with a surprise lead.

As referee Andrew Dallas blew his whistle for half-time, Gerrard’s pre-match comments lingered. If Rangers are to beat Celtic to the title they must win these games, but going into the second half St Johnstone looked to have the momentum.

That feeling was quickly quashed as Rangers put in an outstanding second-half performance to underline their title aspirations.

Just over a minute into the half, Ryan Jack’s lobbed through-ball from inside his own half put Morelos in a straight duel with Tanser. The Colombian used his muscle to bully the left-back away from the ball, before unleashing an emphatic strike past Clark into the roof of the net.

Relief for Gerrard and Rangers. A perfect response to anyone who doubted their mentality and title credentials.

The goal knocked the stuffing out of the hosts, and it was 2-0 just after the hour. James Tavernier’s cross was directed slightly behind Goldson, but the centre-half managed to power his header into the net. Job done… almost.

The visitors continued to dominate up until the 87th minute when a rare St Johnstone attack led to a corner, which ended up being cleared off the line. As the home players desperately appealed for a goal to be given, referee Dallas waved play on, allowing Rangers to ruthlessly race up the other end and Defoe to finish expertly to seal the points.

It was a crushing blow for Tommy Wright’s side, who are still without a win since their League Cup victory over Brechin City at the end of July.

Defoe then quickly added his second and Rangers’ fourth to add some gloss to the scoreline and round off a superb second-half performance – one which will give Gerrard confidence that his side are capable of pushing Celtic all the way this season.

Man of the match – Joe Aribo

After a poor first-half display, Rangers sizzled in the second. In the end they had several man of the match candidates – Joe Aribo was one.

One of the visitors’ few bright lights before the break, he shone as the game wore on. Clearly growing in confidence, he was a menace to the St Johnstone rearguard throughout, and was unlucky not to get on the scoresheet himself.

‘We could have scored a few more’ – reaction

St Johnstone manager Tommy Wright: “At half-time we were reasonably happy, we didn’t really have too many problems.

“[On St Johnstone’s appeal for a goal] I think the ball crossed the line and that’s the wee bit of luck that you need in these situations. I’m not saying we deserved anything from the game but it could have changed the context of the game and what happened in the last five minutes.”

Rangers manager Steven Gerrard speaking to Rangers TV: “I asked them for more in the second half and I certainly got it – I thought the second half performance was on a different level to the first.

“We looked hungry, full of running and full of energy and could have scored a few more goals.”