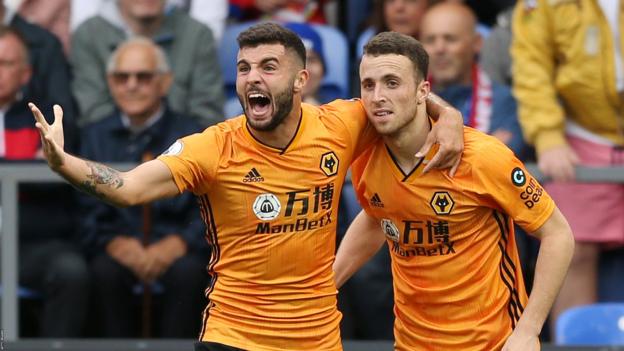 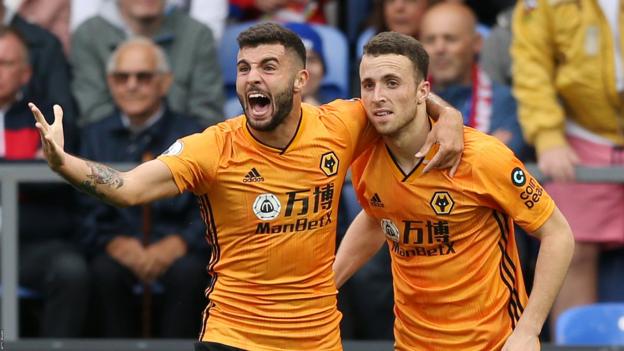 Leander Dendoncker’s own goal had seemed certain to give Palace victory before Jota’s late strike for the visitors, who had Romain Saiss sent off for two bookings.

Wilfried Zaha’s failure to maintain possession for Palace saw Adama Traore gallop clear on the right and his far-post cross was poked home by Jota from four yards after defender Joel Ward lost his balance.

Palace had been closing in on a top-six spot after a wayward Ward shot flew past goalkeeper Rui Patricio off the unfortunate Dendoncker.

But Wolves, who enjoyed the better of a largely uneventful first half with Dendoncker, Matt Doherty and Jota all having chances to open the scoring, merited their point.

Crystal Palace move up to 12th in the table while Wolves, after just avoiding their third consecutive Premier League defeat, remain 19th.

Wolves show quality needed to get out of trouble

While Wolves manager Nuno Espirito Santo has until now shown no external signs of being a man under pressure, the way in which the visiting bench exuberantly celebrated Jota’s last-gasp goal told a different story.

It had looked like being another miserable afternoon for the Black Country side, who had arrived in London having failed to win any of their opening five top-flight fixtures.

With Ruben Neves relegated to the substitutes bench, captain Conor Coady assumed the early responsibility for orchestrating Wolves’ attacking play from the centre of defence.

The former midfielder, who was converted into the central figure of Wolves’ three-man defence when Nuno arrived in 2017, sprayed several raking cross-field passes to initiate openings.

In the first half, there were few signs of a lack of confidence or fatigue – Wolves have now completed 13 matches this season, almost double the number of most of their domestic rivals.

But it was their attitude to adversity which stood out, as they persevered despite being a man and a goal down in the last 20 minutes.

Substitute Neves curled a right-footed shot just wide while Jota and Traore both saw efforts blocked by a posse of home defenders before Jota’s goal.

Palace revert back to type

After a humbling 4-0 reverse at Tottenham this was very much a Palace performance that reverted back to Roy Hodgson’s blueprint of defensive discipline and organisation.

Forward-thinking midfielder Andros Townsend was sacrificed for James McArthur in the starting XI as the former England manager again deployed a five-man midfield but this time with personnel capable of stifling the opposition,

And that strategy worked during the first period – albeit aided by some errant Wolves finishing – as the teams largely cancelled each other out.

Luka Milivojevic and Kouyate both saw shots from distance deflected behind while substitute Christian Benteke and Jeffrey Schlupp forced Patricio into one-versus-one saves.

But they were simply unable to kill off the game and in committing men forward to do so they showed a lack of game management as they left themselves open to Wolves on the counter-attack.

‘This is a starting point’ – what they said

Wolves boss Nuno Espirito Santo, speaking to Match of the Day: “This is football. We have the spirit, the heart and the character to believe until the end. The boys were running up and down and tired.

“The growing of the team relies on these kind of aspects. We are in the situation where we play Thursday and Sunday.”

What does the game say about character of your side? “It says a lot. We have done it before. In the Championship we managed to win games in the last second. I think we can do better in the first half. We need to reproduce again what we did in the first half to grow as a team.

“This is a starting point. What we did in the first half, lets try to do over and over again.”

Crystal Palace boss Roy Hodgson, speaking to BBC Match of the Day : “I am bitterly disappointed of course. If the game was a draw after the first half I would have few complaints but after the second half, and to get within 90 seconds of a win, it is a tough one to take. It feels like a defeat. I didn’t expect them to get such a clear goal chance. I felt we might add to our score.

“You want game management and players to use experience to see games through but the feeling is one of disappointment and anguish that we weren’t able to see the game through. We have surrendered two points.

Capital gains for Wolves – the stats

Wolves host Reading in the Carabao Cup on Wednesday 25 September (19:45 BST) before resuming their Premier League duties at Molineux against Watford on Saturday 28 September (15:00 BST).