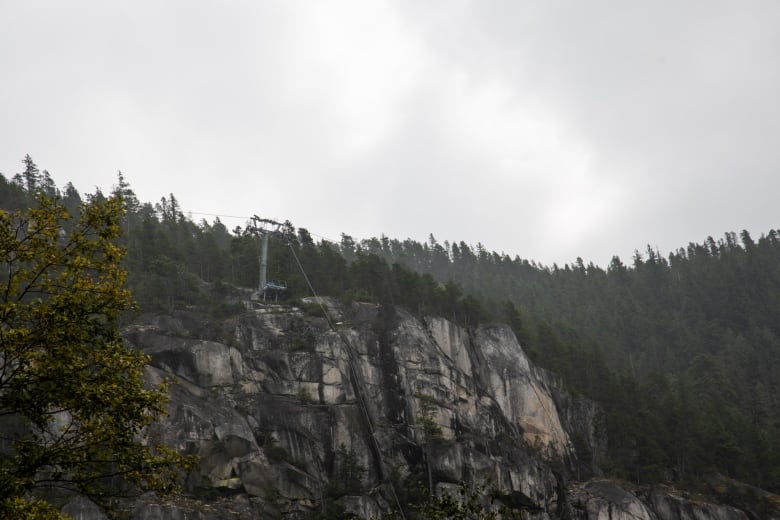 It’s been a devastating year for B.C. businesses — especially for business owners in Squamish, B.C., who are heading into fall faced with the unknowns of an ongoing pandemic, and the absence of the Sea-to-Sky Gondola, a major tourist attraction that has drawn thousands of people to the mountainside town.

Early on Monday morning, the gondola’s cable was cut for the second time, sending cable cars — and the hopes that this season could redeem an already difficult year for the town — crashing into the darkened mountainside.

It would be shocking and unheard of — if it hadn’t already happened before, just over a year ago in the community about 60 kilometres north of Metro Vancouver.

“The first [time] you might feel kind of angry, but the second [time] it’s more confusion — I didn’t think something like this could happen again,” said Felipe Angel, operations manager of the Squamish Connector, a shuttle service that connects Squamish and Vancouver.

Angel said the first time the cable was cut, it devastated his small business, which started up five years ago and partnered with the Sea-to-Sky Gondola to move people from the city up to the fresh, pristine peak. He estimates around 60 per cent of the business’s income comes from customers travelling to the gondola, with the other 40 per cent using the shuttle to commute to work.

“With COVID as well, our business has gone down, we’re only running a half-capacity bus, and there’s not as many people going down to Vancouver for work, but we’re resilient,” he said.

No matter how resilient, it’s been a tough year for Squamish and the local businesses that have boomed over the past decade as the small adventure town transformed into a bona fide tourist destination. Squamish’s tourism sector supports nearly 800 jobs and generates more than $95 million in visitor spending annually.

The gondola played a key role in that transformation, ensuring upwards of 40,000 tourists could access the mountainside above Howe Sound without having to hike a gruelling trail generally reserved for hardcore outdoor enthusiasts.

The gondola cable was first slashed on Aug. 10, 2019. It partially re-opened in February, only to be shuttered again in March because of the pandemic. Squamish was among the communities to bluntly ask visitors to stay away when the pandemic first hit for fear that the virus would spread in the smaller community and ovewhelm health systems. The gondola then endured a slower-than-usual summer before disaster struck again.

The first crime was so recent that the insurance claim hasn’t been fully processed. Almost 30 gondola cars were ruined then, causing between $5 million and $10 million in damage.

Sarah Johnson, the owner and operator of Wild and Heart boutique, said when she awoke to news it had happened again, she was in disbelief.

“It was so unbelievable even the first time that it happened,” she said. “I think everyone just wants to know more and wants to know why.”

Johnson said business at her shop slowed down noticeably after the gondola cable was cut, but picked up over the summer. Her business was shuttered for months at the height of B.C.’s COVID-19 restrictions, but she was feeling hopeful.

“We’re kind of getting all of those hard months behind us and then to wake up yesterday and hear the news, it’s absolutely heartbreaking,” she said.

Johnson said her business pivoted to online sales during the pandemic, opening up to shoppers other than tourists who often wander Squamish’s picturesque streets after a day of taking in the mountain views. She hopes that shift, along with support from locals, will help local businesses survive.

“I definitely think with this happening again that this is going to have an effect on business for a couple of months, and I really hope our locals and our new locals here start shopping more locally and changing a bit of their shopping habits to support us,” she said.

Geoff Stangowitz, the sous chef at Chef Big D’s, a joint known for its toast, hash browns and club sandwich, said he believes the future of the restaurant — and the town’s growth — are in some way tied to the fate of that 120-tonne cable.

The restaurant, which is owned by his father and has been open 19 years, had already suffered a major hit as they operate with reduced seating, Stangowitz said.

Squamish RCMP Sgt. Sascha Banks said investigators have not confirmed if the vandalism incidents are linked or whether the same person might be responsible for both crimes.

But for Angel, standing next to the shuttle bus that has transported thousands of people to the base of the gondola, the only thinkable plan for the future is to keep going.

“We’re just going to continue to move forward and we’re not going to let the actions of one person or a group of people stop us.”