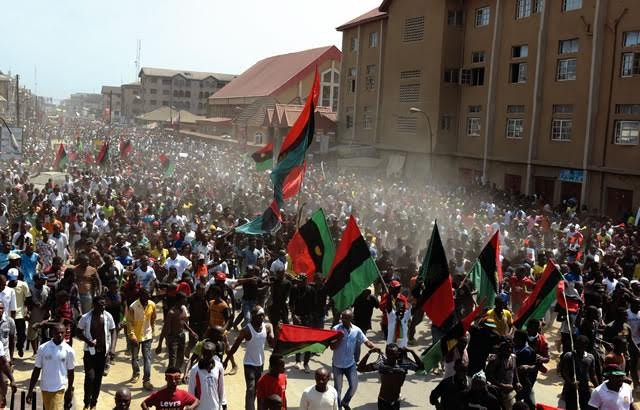 The Indigenous People of Biafra on Tuesday appraised the level of compliance with its sit-at-home order and described it as a huge success.

A statement made available to one of our correspondents in Awka, the Anambra State capital, by IPOB’s Media and Publicity Secretary, Emma Powerful, said apart from Nigeria, the order was observed in no fewer than 75 countries.

He thanked those who made the exercise a success, especially members of the IPOB family.

He described those who did not participate in the exercise as saboteurs, alleging that they were paid by the Federal Government to sabotage the order.

His statement read in part, “The Indigenous People of Biafra and its leadership worldwide congratulate Biafrans and all the IPOB family members worldwide both in Biafra land and in the Diaspora for their compliance with the sit-at-home order issued by our indefatigable leader, Mazi Nnamdi Kanu.

“Mazi Nnamdi Kanu issued this sit-at-home order when he was still in Kuje Prison, Abuja, and it has come to pass; all the people of Biafra both home and abroad complied in all totality. This had not been done in the history of Biafra struggle before.

“We also blame those saboteurs who were paid by the government to sabotage the restoration project because today Biafrans and IPOB members worldwide obeyed Mazi Nnamdi Kanu. We, IPOB, must be strong and we promise everybody that Biafra is here.”

But our correspondent observed that the exercise recorded partial success in Anambra State.

The Hausa market located in Dike Park at the heart of Awka, the state capital, was closed even as banks, schools and other major markets were closed.

Despite the order, a few commercial vehicles operated along the Old Awka-Onitsha Road.

Vehicular movement was paralysed in major cities of Onitsha, Nnewi, Awka and Ekwulobia.

The Commissioner of Police in Anambra State, Mr Sam Okaula, said in a telephone chat that the exercise was peaceful.

The Movement for the Actualisation of the Sovereign State of Biafra has declared Tuesday’s sit-at-home protest as a ‘huge success’.

MASSOB claimed that the success of the exercise was an indication that, should a referendum be conducted in Biafra areas, the people would vote to secede from Nigeria.

“The huge success achieved in today’s sit-at-home exercise is marvelous and glorious because the Almighty God approved our programme for the commemoration of the golden jubilee of the declaration of Biafra by ‘General’ Chukwuemeka Odumegwu-Ojukwu.

“The huge success is evident that the coming Biafra referendum shall be a walkover against the Nigerian state,” MASSOB leader, Uchnna Madu, said in a statement, on Tuesday.

He dedicated the huge success to schoolchildren, commercial bus drivers, motorcyclists, tricycle drivers and corporate firms that complied with the sit-at-home exercise.

In Ebonyi, the sit-at-home order to honour Biafra’s fallen heroes, who died during the Civil War between 1967 and 1970, was partially complied with by residents of Abakaliki, the Ebonyi State capital, and other neighboring towns in the state.

One of our correspondents reported that economic and commercial activities, including vehicular movements were witnessed in the state during the exercise.

As early as 4am, the state capital witnessed a heavy presence of armed security operatives, who patrolled the town with vehicles. Helicopters were also used for surveillance.

As the day broke, economic activities gradually gathered momentum with residents trooping out of their houses for their places of work.

Shops, which were initially locked, opened up for commercial activities in the capital.

Also, a visit to some schools in Abakaliki showed that academic activities were ongoing while motor parks were opened for commercial activities.

A bank customer, who preferred anonymity, told one of our correspondents that he was glad that the banks opened for transactions, stating that anything otherwise would have brought hardship on the people.